Bruxism is a repetitive jaw-muscle activity that is typically characterized by grinding or clenching of the teeth. Bruxism has two distinct manifestations: it can occur during sleep (sleep bruxism) or during wakefulness (awake bruxism) (Lobbezoo et al., 2013).

Sleep bruxism can begin in early childhood and last throughout adulthood. Tooth grinding can occur as soon as teeth erupt and may increase in frequency during early and middle childhood. Sleep bruxism is a relatively common, intermittent problem in children, occurring in 14% to more than 20% of children (Laberge et al., 2000; Ng et al., 2005). A small proportion of childhood sleep bruxers will continue these behaviors into adolescence and adulthood (Carlsson, Egermark, & Magnusson, 2003).

The most common correlate of sleep bruxism is abnormal tooth wear (see Fig. 11.1). Diet and harsh environmental and climatic conditions (e.g., high levels of sand or grit) may also contribute to wear. The wear observed in sleep bruxism patients is due in part to bilateral mandibular excursions, small lateral movements, and unilateral excursions occurring during sleep. The amount of force exerted during sleep bruxing behaviors may exceed amplitudes generated during maximum voluntary bite force (Ohayon et al., 2001). Hypertrophy of the masticatory muscles may be observed in patients who report sleep bruxism. In more severe cases, the behaviors associated with sleep bruxism can lead to tooth fractures. 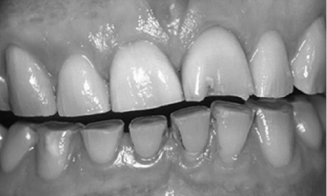 Although the destructive effects of sleep bruxism are well-known, the disorder may also have functional utility. In a study of patients with obstructive sleep apnea and sleep bruxism, audible grinding events typically occurred at the end of an apnea or hypopnea event. Treatment with a continuous positive airway pressure device eliminated audible grinding (Oksenberg & Arons, 2002). In nonbruxism subjects, experimental acidification of the lower esophagus led to rhythmic masticatory muscle activity (RMMA), sleep bruxism, and increased swallowing (Ohmure et al., 2011). These findings suggest that sleep bruxism and associated physiologic events may have protective effects in some individuals.

The most common correlate of awake bruxism is pain in the muscles of mastication or in the temporomandibular joint (TMJ) (Glaros, 2008). A high frequency of awake bruxism (i.e., tooth contact) is also associated with common headaches (Glaros, Urban, & Locke, 2007). However, the relationship between sleep bruxism and pain is much less clear. When sleep bruxism is limited to nocturnal grinding behaviors, there is little evidence that grinding is associated with myofascial pain (Rompré et al., 2007).

Increased healthcare expenses are a societal cost of bruxism. Patients with these conditions have a larger number of visits to dentists, physicians, and other healthcare providers (Molina et al., 2000) than nonbruxism controls. They also use more medications than controls. The individual social costs of sleep and and awake bruxism cannot be estimated accurately, but they may include decreased productivity at work or school, strained relationships with bed partners, and pain-related irritability affecting others.

There are two main etiological models of bruxism: (1) a centrally mediated theory that views bruxism as a sleep-related disturbance and (2) a local, mechanical theory hypothesizing that occlusal interferences predispose an individual to brux.

The view that bruxism is a sleep-related disorder (parasomnia) was first proposed by Broughton (1968), and multiple studies since that time have confirmed his primary hypothesis. Sleep bruxism typically occurs during stage 2 sleep (the most common sleep stage), REM sleep, and in the transition from deeper to shallower levels of sleep. Although there are differences in the miscrostructure of sleep between sleep bruxists and normal controls, the macrostructure is similar between the two groups, and sleep bruxers often report good sleep.

Individuals who engage in sleep bruxism appear to be more sensitive to the effects of micro-arousals. In one study (Kato et al., 2003), polygraphic recordings were taken from eight bruxists and eight matched controls. While sleeping, vibrotactile or auditory stimuli were used to induce arousal without causing awakening. All of the individuals with sleep bruxism but only one of the nonbruxism controls responded to the presentation of the stimuli with RMMA.

A sleep bruxism episode involves a cascade of physiological events starting well before the onset of RMMA and tooth grinding (Lavigne et al., 2007). Sympathetic-cardiac tone increases 4–8 minutes before an episode of RMMA. Increased EEG activity occurs four seconds before RMMA, and heart rate increases one second before RMMA. The suprahyoid muscle shows increased activity 0.8 seconds before the onset of RMMA and tooth grinding. The evidence suggests that the motor cortex is not solely responsible for sleep bruxism and that systems controlling autonomic and cardiac functioning play a significant role in sleep bruxism.

The alternative viewpoint focuses most intensely on occlusal variables. In this model, high restorations and other local irritants, malocclusions, or traumas induce the nervous system to engage in sleep bruxism. When the local irritant is removed, bruxism will then cease. The logical implication of this perspective has led dentists to perform occlusal adjustments in an attempt to remove occlusal disharmonies and eliminate sleep bruxism.

Evidence for this perspective is mixed. Deliberate creation of occlusal disharmonies is generally well tolerated in both sleep bruxing and nonbruxing patients. Sleep bruxism may be associated with Class II and III occlusions, deep bite, overjets, or artificial contacts between posterior teeth (e.g., Sugimoto et al., 2011). However, the ability to predict or modify nocturnal grinding from occlusal contacts has not received consistent support in the scientific literature (Lobbezoo et al., 2012).

Several mechanisms (Glaros, 2008) have been proposed for the persistence of awake bruxism (i.e., tooth contact) in spite of its painful consequences. One perspective considers tooth contact to be an adjunctive behavior, that is, a behavior (e.g., clenching) that occurs close in time to another behavior that is formally reinforced. Adjunctive behaviors are sometimes characterized as stereotyped, irrelevant, or out of context, a reasonable description for a behavior that can occur as often as 40% in normal controls and more than 70% of the time in those diagnosed with the myofascial pain of temporomandibular disorders (Glaros et al., 2005). Alternatively, individuals who engage in awake bruxism may have deficits in their ability to accurately report on the activity of their masticatory muscles (Glaros, 1996), leading individuals to be functionally unaware of their behaviors.

The role of psychosocial stressors and personality variables in sleep and awake bruxism is complex. The relationship appears to be weak in those who engage in sleep bruxism but stronger in those who engage in awake bruxism (Manfredini & Lobbezoo, 2009). Personality studies of sleep bruxers suggest that they are anxious and tense (Restrepo et al., 2008). They may also have a higher level of perceived stress and have an inability to deal with these stressors in a positive manner (Giraki et al., 2010). It is difficult to know if these traits are etiologically related to sleep bruxism or whether these traits are a response to the social embarrassment of having significantly eroded teeth and an unattractive smile.

Sleep bruxism has been linked to stress, but like the personality trait studies, it is difficult to know if stress precedes, is coexistent with, or follows bruxism. Studies carried out with mammals suggest that the deliberate creation of occlusal dysharmonies can increase plasma and urinary cortisol levels associated with stress and central catecholaminergic activity (Areso et al., 1999). Significantly higher levels of urinary catecholamines are found in individuals with sleep bruxism (Seraidarian et al., 2009). In adults, exposure to psychological stress increases salivary levels of chromogranin A, a biomarker for emotional stress, in those with sleep bruxism but not in those without sleep bruxism (Abekura et al., 2011). Investigators have also suggested that nonfunctional masticatory activity, such as sleep bruxism, is a stress-control mechanism affecting central catecholamineregic neurotransmission (Gomez et al., 1999).