Ankylosis of the Temporomandibular Joint

There are many causes of limited mouth opening which may be classified as follows.

• Closed lock due anterior displacement of the meniscus without reduction.

• Osseous or fibro-osseous ankylosis, secondary to trauma, infection or osteoarthritis.

Only the management of intra-articular ankylosis with its marked disturbance in facial skeletal growth will be considered here.

Certain factors are significant; extra- and intracapsular joint trauma are common in children and adults but ankylosis is very rare (Figures 13.1a–13.1e). Experimental ankylosis is very difficult to produce in animals without inserting a bone graft.

Removal of the meniscus produces a condylar overgrowth similar to the ankylosis deformity but without fusion (Figures 13.2a–13.2c).

However the rare fibrodysplasia ossificans progressiva which has an unexplained short first toe (Figure 13.3) and widespread heterotopic bone formation, is associated with an excess of the bone morphogenetic protein 4 (BMP 4) gene which may be due to a deficiency of the BMP inhibitor genes, curiously named gremlin (DRM) and noggin. Also the progressive ankylosis gene ank produces intra-articular and peri-articular joint fusion in man and mice.

The outcome of such a localised abnormal genotype could be a deficiency of RANKL (receptor activator of nuclear kappa ligand) a key messenger responsible for osteoclastogenesis, when the affected structures are challenged by trauma or infection.

The natural history is usually infantile and pre-adolescent loss of the meniscus due to:

• birth trauma with displacement of the meniscus; 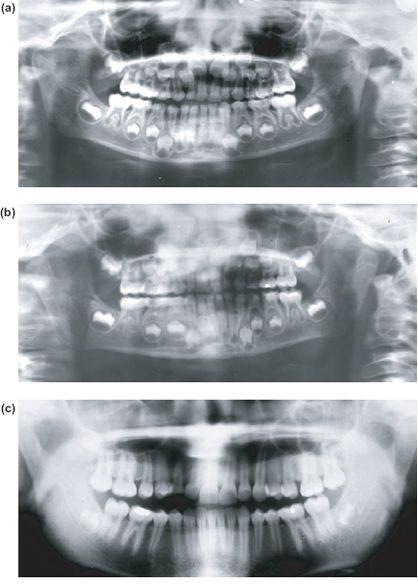 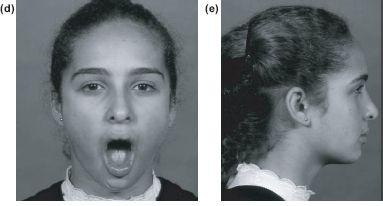 The idiopathic intracapsular bony fusion appears to arise through the following sequence of events.

i) Condylar damage and loss of meniscus due to traumatic displacement, inflammmation or infection.

ii) Irregular reparative condylar overgrowth with varying degrees of mechanical, fibrous and bony ankylosis with ossification of the joint capsule.

Ankylosis in children produces impaired mandibular growth with bilateral deformity in all dimensions. This deformity is asymmetrical in unilateral cases with a straight small hemimandible on the ankylosed side, and a marked contralateral bowing deformity. Retrognathia and retrogenia (Figures 13.4a–13.4c) become more apparent with age. This produces an occlusal cant down to the normal side. In rare bilateral cases the mandible is short but symmetrical. In all cases the inter-incisal opening can be up to 10 mm even with total bony fusion reflecting the bone elasticity within the masticatory system. There appear to be two causes of the impaired growth pattern. 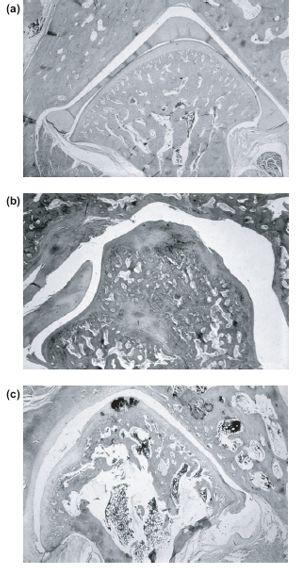 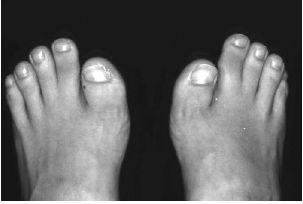 i) The loss of the condylar fibrocartilage.

Although the condylar growth cartilage is not considered to be the primary growth centre for the entire mandible, it makes a significant contribution to the height of the condylar head, neck and the ascending ramus including the angle of the mandible. This can be seen very clearly after perinatal ankylosis following birth trauma when the dental lamina has to extend backwards into the ascending ramus due to the lack of local alveolar bone at the angle (Figure 13.4f). The contralateral intact condylar growth centre continues to grow down and forwards towards the affected side producing the characteristic bowing deformity.

ii) The loss of function.

Persistent impaired function of any bone inhibits its linear and cross-sectional growth as can be seen in the ankylosed mandible in Figures 13.5a–13.5d. However this is avoided when the mandibular body is freed early before the adolescent growth spurt and function is restored. Figure 13.4 shows the natural history of a childhood ankylosis treated with a costochondral graft from the age of 4 through to 27 years. 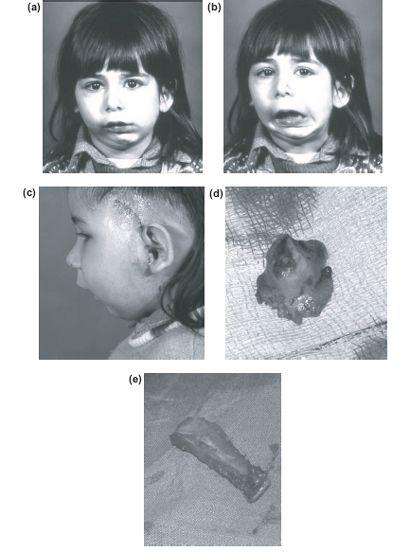 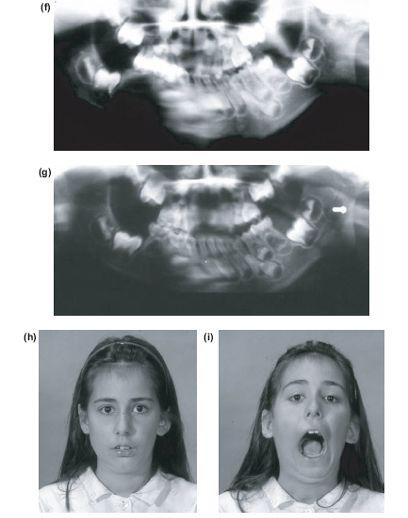 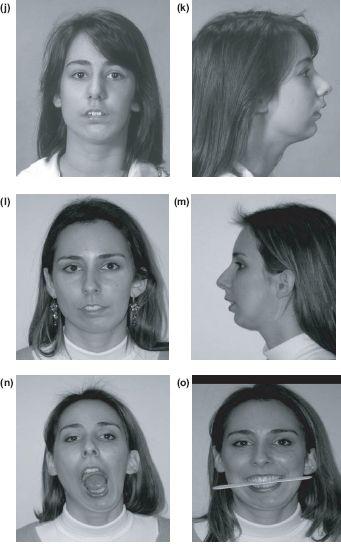 Figure 13.4 (f) and (g) Following division of the ankylosis, ipsilateral coronoidectomy and costochondral graft. Early pre-adolescent arthroplasty allows catch-up growth and remodelling at 13 years (h) and (i), 19 years (j) and (k) and at 27 years. (l), (m), (n), (o) Inadequate growth of the costochondral graft is seen as deviation of the chin at rest and on opening, with a secondary limitation of the ipsilateral maxilla producing inclination of the occlusal plane. The ankylosis defect or surgery has also produced winging of the left ear.

However it is interesting to compare this with the outcome of a simple gap arthroplasty where the mandible can develop normally even without a condylar growth cartilage replacement (Figure 13.6). 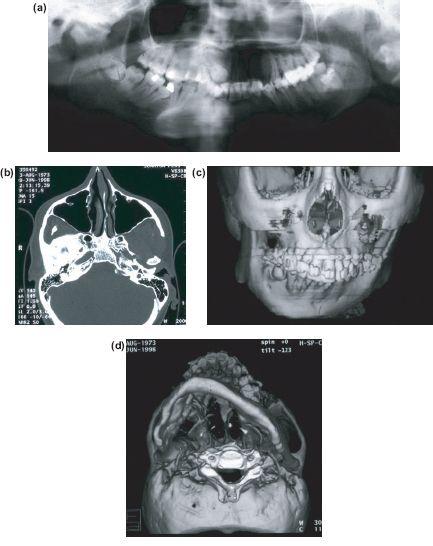 Figure 13.5 Imaging showing (a) apparent fibrosseous ankylosis of right TMJ but (b) shows complete fusion with base of skull. (c) 3D CT shows straight ankylosis side with deformed growing contralateral side with occlussal cant and (d) lower border of mandible shows impaired growth in all dimensions (case of Kieren Coghlin). 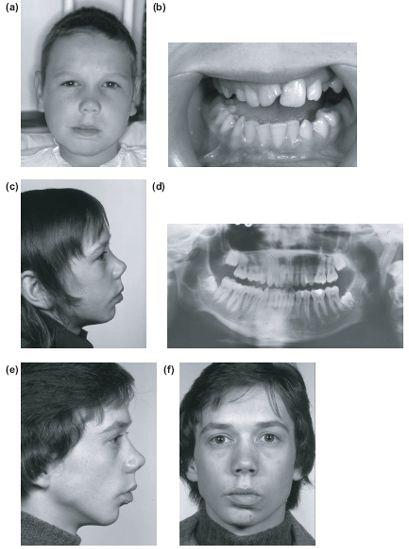 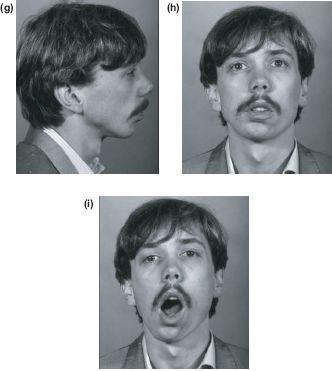 Figure 13.6 Post-traumatic right TMJ ankylosis at 10 years (a) and (b) treated with only a wide gap arthroplasty. (c) and (d) Facial growth and a functional pseudarthrosis. Normal growth and function at 19 (e) and (f) and 26 years with excellent opening but asymmetry limited to the loss of the condylar head and neck height (g)-(i).

It has been estimated that from 3-16 years the ascending ramus grows approximately 2 cm in height and the body of the mandible 2.5 cm in length. The aims of treatment are to:

• restore the ramus height and its growth potential as early as possible,

• release the functional growth of the mandibular body, and

• Excise the bony fusion as early as possible.

There are many treatment strategies depending on the age of the patient the duration of the deformity and degree of secondary deformity, but in all cases, success depends on preventing recurrence of the localised idiopathic fibrodysplasia ossificans.