11 – The Influence of Attachment Systems on Implant-Retained Mandibular Overdentures

The Influence of Attachment Systems on Implant-Retained Mandibular Overdentures

Replacement of lost tissues with complete dentures is challenging for both dentist and patient. 1,2 However, the efficacy of some endosseous implant systems now allows patients to be successfully treated with implant-retained overdentures. Several studies report the clear benefits of overdenture treatment compared to conventional dentures for a number of aspects, including esthetics, speech, chewing, fit and retention, function, and quality of life.3,4

A variety of attachment systems have been used to retain overdentures. Generally, these can be classified as clips-and-bars, balls, magnets, and telescopic copings (rigid or nonrigid). The selection of an attachment system is mainly related to the personal choice of the practitioner and/or laboratory responsible, based on experience and training.

Advanced alveolar bone resorption may favor a connector that offers a considerable amount of hori zontal stability, such as bars or telescopic attachments.5 When alveolar resorption is minimal, magnets offer an alternative solution, although they provide the least retention force compared to the other attachments and lose their initial retention capacity rather soon.6 Balls are ideal for patients with a narrow jaw anatomy, because bars leave insufficient tongue space.7 Although nonrigid telescopic copings produce low stress at the implants and surrounding bone, as do ball or magnet attachments, rigid telescopic copings induce considerably higher stresses. The concern here is not the biologic response to these stresses (potential marginal bone resorption) but the increased risk for implant fatigue and eventual fracture of the implant or its components. 8 On the other hand, the more rigid the connector, the least loading on the edentulous posterior areas and, indirectly, the least alveolar bone resorption.

Cost is an important factor to consider as well, especially in this kind of treatment. Magnets and balls are the least expensive; bars and especially telescopic copings are the most expensive.

Very few studies have prospectively compared clinical outcomes.9-13 The clinical trial discussed in this chapter investigated the treatment outcome of splinted (bars) and unsplinted (balls and magnets) implants retaining a mandibular hinging overdenture 5 and 10 years after delivery of the prosthesis. Telescopic copings, due their limited application, are out of scope here.

Thirty-six completely edentulous patients with a mean age of 63 years were enrolled in the study.6,14 All patients had complaints about their existing dentures, even after technical improvement. The exclusion criteria for patient selection were insufficient bone volume to harbor at least two 10-mm implants, retro-gnathic mandible, psychologic diffculties accepting a removable denture, gagging reflex, less than I year of edentulism in the mandible, absence of a maxillary complete denture, and administrative or physical considerations that would seriously affect the surgical procedure or hinder a 5-year follow-up. All patients where recalled 10 years after delivery as well.

Each patient was provided with two screw-shaped commercially pure titanium implants (Brånemark system, Nobel Biocare, Göteborg, Sweden) in the symphyseal area of the mandible. 15 Overall, 73 implants were placed and transmucosally connected to the abutments 3 to 5 months later.

The 36 patients were randomly allocated into one of the three groups, each with a different attachment system (Figs 11-1a to 11-1c). The bar group, considered the reference group, was provided with an egg-shaped Dolder bar (Cendres et Metaux SA, Biel, Switzerland) splinting the two implants. The magnet group used two open-field magnets (Dyna Engineering BV, Bergen op Zoom, The Netherlands) as attachment system. In the ball group, overdentures were retained by two ball attachments with rubber rings (SDCB 115-17, Nobel Biocare, Göteborg, Sweden).The occlusion was set in centric relation without anterior tooth contact. The lateral excursion and protrusion were assessed on an articulator and intraorally to secure a balanced articulation.

Patients were scheduled for follow-up visits I week after prosthesis insertion and 4, 6, 12, 24, 36, 48, 60, and 120 months after abutment installation. The results at 10 years after delivery concern implant and marginal bone outcome only; all other data refer to the 5-year recall visits.14

Each follow-up visit included evaluation of the presence or absence of plaque and mucosal bleeding (defined as bleeding elicited 20 seconds after running a periodontal probe I mm into the mucosal sulcus parallel to the abutment wall).The minimum and maximum scores per abutment were 0 and 4, respectively.

The pocket probing depth (PD) and gingival recession were measured with a periodontal probe at six sites around each abutment. The rigidity of the implant-bone continuum was evaluated by means of the Periotest device (Siemens, Bensheim, Germany) from -8 (very stable) to +50 (very mobile).

An implant was considered a failure if (1) a peri-implant radiolucency could be detected, (2) the slightest sign of mobility (Periotest value > +5) was detected, and (3) signs or symptoms such as pain or infection were reported. Marginal bone level, measured radiographically by the same independent investigator, was rated mesially and distally using a long-cone apparatus.

Overdenture retention was measured by means of a dynamometer with a maximum capacity of 20 N; the mean of three repeated measurements was calculated.12 The mechanical complications of the attachment compo-nents were recorded in addition to the soft tissue complications of the denture-bearing area (mucositis, soreness, ulcer decubitus, and hyperplasia) for the entire observation period. 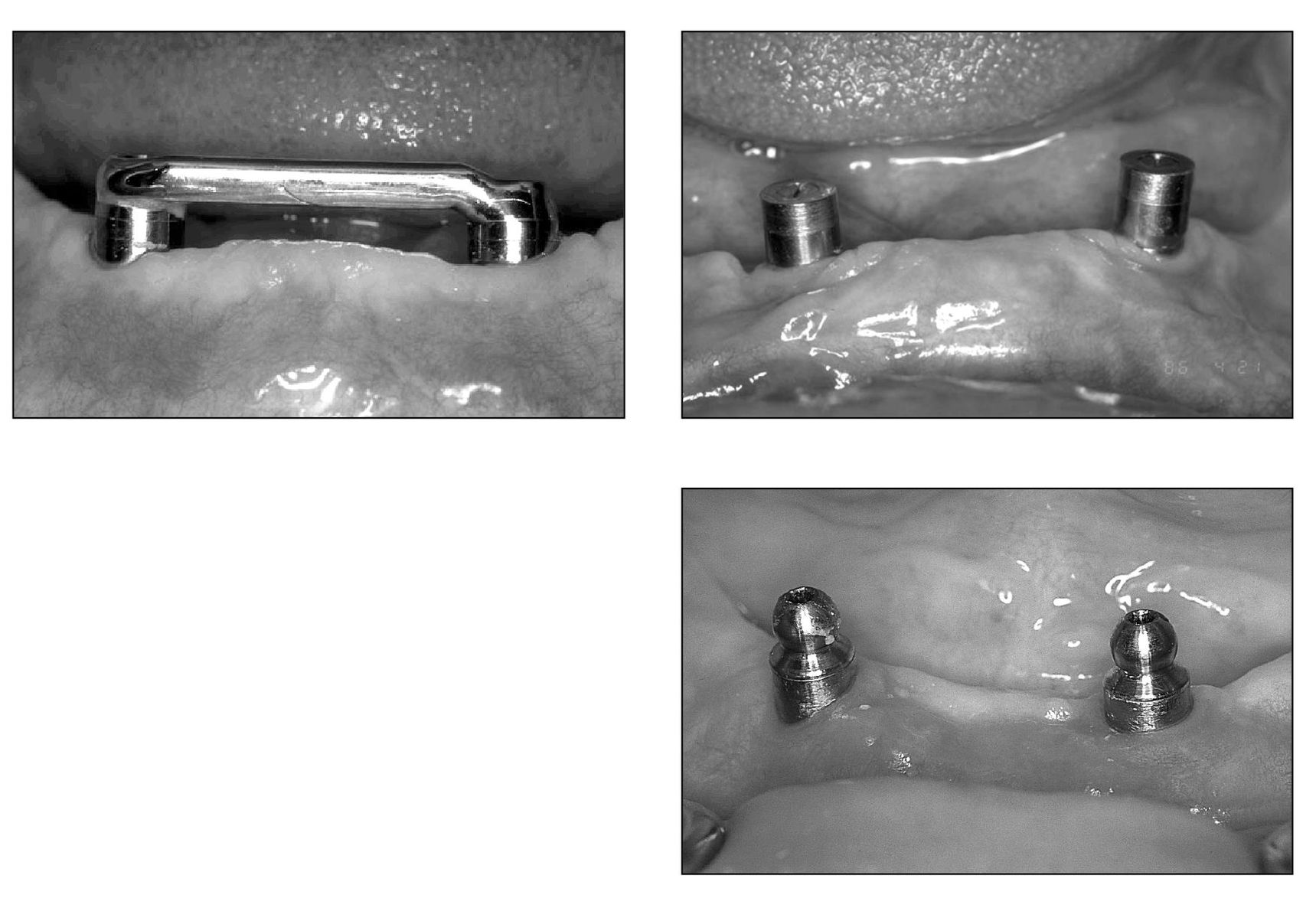 Patient satisfaction was investigated through a questionnaire. Patients answered questions on a scale ranging from I (very bad) to 9 (very good). A second part included questions with a “yes/no” response

Function of the temporomandibular joints and masticatory muscles was assessed according to an anamnestic and clinical dysfunction index.16

To avoid a clustering effect, the mean scores of the two implants per patient were considered. Differences of presence or absence of plaque, mucosal bleeding, Periotest values, marginal bone, and attachment level per group, as well as over time, were analyzed by a modified analysis of variance test. For the analysis of marginal bone changes, the intraexaminer’s variability (0.2 mm) was set as the detection threshold for marginal bone changes. Differences in patient satisfaction per group at year 5, as well as the variations in patient satisfaction over time, were analyzed by a nonparametric Kruskal-Wallis analysis of variance test. Both the objective and subjective retention of the overdentures, for all three groups, was analyzed by a nonparametric Spearman correlation analysis. The level of significance was set at .05 unless otherwise stated.

Five patients did not return for the 5-year follow-up. One patient, from the magnet group, was dissatisfied with the prosthetic treatment outcome. Fouryears after treatment, she had a new overdenture made on a bar by a private practitioner. Ten years after del i very, 10 patients had died.

During the 10-year period, none of the loaded implants failed. Only one implant had failed at the time of abutment surgery (due to mobility) and was replaced in the same session by a new implant that healed uneventfully.

Tags: Implant Overdentures The Standard of Care for Edentulous Patients
Jan 7, 2015 | Posted by mrzezo in Implantology | Comments Off on 11 – The Influence of Attachment Systems on Implant-Retained Mandibular Overdentures
Premium Wordpress Themes by UFO Themes
WordPress theme by UFO themes