Distally inclined third molars represent only a low percentage (2% to 5%) of all impacted teeth, but their removal is often awkward. The difficulties that the clinician has to overcome are of two types:

• The distal inclination of the crown induces a mesial drift of the roots, which are pressed against those of the second molar. The absence of the interdental septum makes insertion of an elevator blade difficult.

• The occlusal aspect of the crown is directed toward the anterior portion of the ramus, and in most cases, tooth elevation is obstructed by the bone wall. If the tooth cannot be displaced laterally, the operator must most often consider a surgical protocol that involves both removal of the bone obstruction (located against the occlusal aspect and coronal walls) and tooth sectioning.

The alveolar ridge is generally located above the line of greatest contour of the tooth because the distal inclination embeds the crown in the anterior part of the ramus.

The maximum depth of impaction is measured at the level of the distal cementoenamel junction.

The tooth cannot erupt completely while the crown is retained by the distal bony and fibromucosal structures. Therefore:

• The distal portion of the crown is often visible and pericoronitis may be associated with incomplete tooth emergence.

• Incision of the fibromucosa is required to expose the occlusal table in its entirety before selection of the surgical protocol.

• When the pericoronal space is widened (Class I and sometimes Class II situations), the tooth may be removed using extraction forceps with a slight rotating movement, followed by lateral luxation (lingual or buccal).

• If the bone tissue partially or totally covers the distal marginal crest, bone removal is undertaken using a round bur mounted on a handpiece.

• In Class II and III situations, crown sectioning is the preferred course of action. It is dependent on the axis of mouth opening and results in the formation of an oblique furrow joining the distal collar of the tooth (Figs 11-6a to 11-6d).

• In the case of converging or diverging roots, full root separation completes crown sectioning (Figs 11-7 and 11-8).

• Root extraction may be performed with a lateral fulcrum when using a Cryer triangular blade elevator. The mesial root is extracted first; it is sometimes useful to remove part of the inter-root septum in order to extract the distal root, using the same type of elevator. 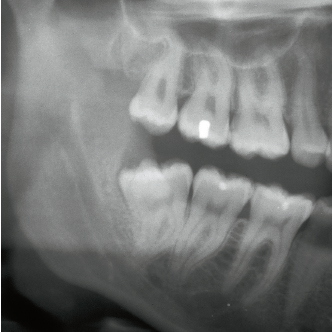