10. Serendipity and the Discovery of the Modern Dental Implant

Serendipity and the Discovery of the Modern Dental Implant

Important scientific discoveries are sometimes the result of an accident or chance (serendipity). A scientist may be involved in experiments on one topic when an unrelated observation appears. In some cases this observation is ignored; in others it may trigger thoughts worthy of further consideration, leading the scientist into a completely different field of study.

One of the most famous examples of serendipity concerned an observation that led to the discovery of the antibiotic, penicillin. Dr Alexander Fleming (later Sir) was a bacteriologist who had already discovered an enzyme in tears, called lysozyme, which was able to kill bacteria. In 1928, he was studying a group of bacteria, the Staphylococci, well known for causing disease. Not being renowned for his cleanliness in the laboratory, Fleming left for a few days without tidying up. On his return he came across some old culture dishes without their lids that had been lying around exposed to the atmosphere. He noticed that one dish was partly contaminated with a mould. The unaffected part without any mould still contained bacterial colonies of living Staphylococci. However, the zone adjacent to the mould was completely devoid of bacteria. Fleming realised that the mould must have released a substance that killed the bacteria in its immediate vicinity.

Following up this chance observation, Fleming identified the mould as belonging to the penicillin family of bacteria, and he named the bacteria-killing substance ‘penicillin’. He further discovered that penicillin was lethal to a number of other bacteria responsible for serious illnesses, such as pneumonia, scarlet fever and meningitis, and in 1929 he published an account of his findings. However, working on his own and with limited resources, Fleming found the penicillin mould difficult to culture and the bactericidal agent, penicillin, hard to extract. He also suspected that penicillin might not remain active once injected into humans, so he abandoned the research.

In the late 1930s, Drs Howard Florey and Ernst Chain (both later knighted) were working in England on bactericidal agents and rediscovered Fleming’s earlier report on penicillin. With greater determination, belief and expertise, they went on to isolate and produce penicillin in sufficient quantities to inject into a few patients. Those early trials demonstrated penicillin’s enormous potential as an antibacterial agent. The question then arose as to whether the production process of penicillin should be patented. This could engender enormous financial rewards. Although there was some disagreement among the research team, the decision was made by Florey not to patent it, but to give it freely to the world. (A similar moral problem arose with the discovery of general anaesthesia; see Chapter 3.)

With the onset of the Second World War, production of penicillin was moved to North America, the only country where it could be produced in the large, industrial quantities required, although this meant that the financial profits would go to America. In 1953, Florey, Chain and Fleming were awarded the Nobel Prize for Medicine for their discovery of penicillin.

In humans, the roots of teeth are attached to the adjacent bone by a fibrous joint (periodontal ligament; Figure 10.1A). As humans have only one set of adult teeth (see Chapter 4), a main goal in dentistry is to replace teeth when they are lost by disease or trauma. The ideal solution might be to replace a missing tooth with one grown in a test tube using modern tissue-engineering techniques. For this to succeed, the new tooth must be accepted by the body as ‘self’ and not be rejected as ‘foreign’. Even if this technique eventually becomes available, it may well prove too lengthy and expensive for general use. Until recently, two viable solutions were on offer: a removable denture or a fixed dental bridge.

A removable plastic denture may be either partial (if only a few teeth are replaced) or full (if all the teeth are replaced). A full denture may lack sufficient support from the underlying bone, rendering it loose and causing difficulty in eating and speaking. Even partial dentures are not always easy to fit and may require additional clips on adjacent teeth to provide stability. As dentures can cover a considerable area of the mouth, they may reduce the sensation of taste and perhaps look ‘false’.

A fixed bridge, on the other hand, is more stable but has the disadvantage of necessitating the cutting away of sound tissue in adjacent teeth, which are then capped to support a false tooth that fills the space (Figure 10.2). 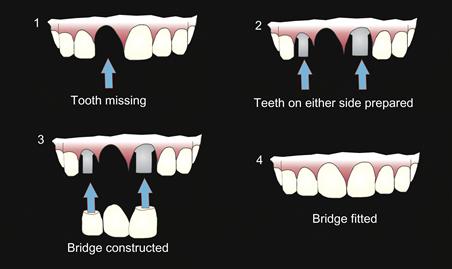 A third solution to replacing a tooth or teeth would be to use what is termed an ‘implant’. This involves inserting a pin (the implant) into the bone of the jaw where a tooth is missing that acts as a sup/>

Tags: Nothing but the Tooth A Dental Odyssey
Jan 5, 2015 | Posted by mrzezo in General Dentistry | Comments Off on 10. Serendipity and the Discovery of the Modern Dental Implant
Premium Wordpress Themes by UFO Themes
WordPress theme by UFO themes