1: Periodontal Problems in the Young: Myth or Reality?

Periodontal Problems in the Young: Myth or Reality?

This chapter aims to dispel the myth that periodontal diseases are only of concern for adults in their thirties and older (Box 1-1). It provides an overview of the features of the different periodontal problems that can affect children, adolescents and young adults.

Q. Is it myth or reality that periodontitis only affects adults after 30 years of age?

Q. Is it myth or reality that periodontitis affects some children?

Q. Is it myth or reality that periodontitis affects many teenagers?

Q. Is it myth or reality that periodontitis affects young adults under 30 years of age?

Q. Is it myth or reality that the current classification of periodontitis (International Workshop 1999) recognises a variety of periodontal problems that can affect young people under 30 years of age?

Key Features of the Periodontium in Health

Appreciation of the key clinical and histopathological features of the periodontium in health is fundamental to the subsequent understanding of the disease process (Figs 1-2 and 1-3). For a more detailed account, the reader should refer to the first book in this series Understanding Periodontal Diseases: Assessment and Diagnostic Procedures in Practice (Chapple and Gilbert 2002). 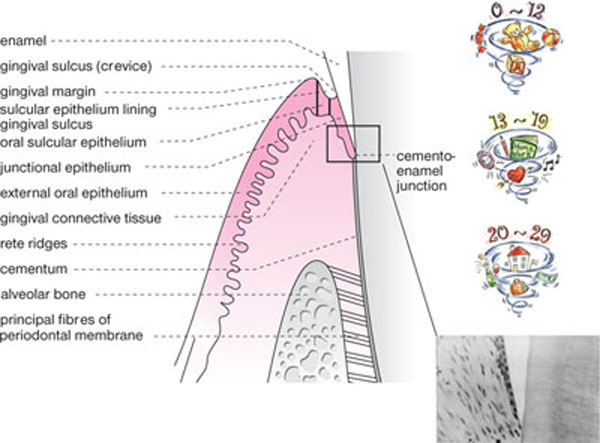 The principal components of the periodontium are:

The healthy gingiva has a firm, pink, scalloped, knife-edged appearance, although pigmentation is a normal characteristic of certain ethnic groups. In the healthy state in children and teenagers, the gingival margin is several millimetres coronal to the cemento-enamel junction (CEJ). The gingival sulcus is essentially a shallow groove, 0.5–3mm deep on a fully erupted tooth, which surrounds the tooth. It is lined by sulcular epithelium (SE) and junctional epithelium (JE), with the gingival margin forming its most coronal boundary (see Fig 1-3).

The gingiva attaches to the enamel via a weak junctional epithelial attachment, comprising the hemidesmosomes within the JE cells and a basal lamina that is produced by the epithelial cells. The hemidesmosomes attach the JE cells to the basal lamina, which in turn attaches to the tooth enamel. The cells of the JE attach to each other via desmosomes and gap junctions (Fig 1-4). JE is permeable with wide intercellular spaces, making it a leaky tissue through which various cells and substances transmigrate; for example, bacterial toxins may pass into the periodontal tissues and polymorphonuclear leucocytes (PMNLs) readily migrate from the tissues into the gingival sulcus as part of the first line of the periodontal host defence system (see Chapter 2). The JE is also weak and is readily disrupted by periodontal probing or flossing which can cause it to split. The split occurs within the JE, rather than between the JE and enamel; fortunately, this is soon repaired (two to six days) due to the rapid turnover of epithelial cells. The most coronal surface of the JE forms the base of the gingival sulcus, where it is approximately 0.15mm wide and comprises 20 – 30 cell layers. The most apical extent of normal, healthy JE is usually at the CEJ and is only a single cell layer wide (see Figs 1-3 and 1-4). 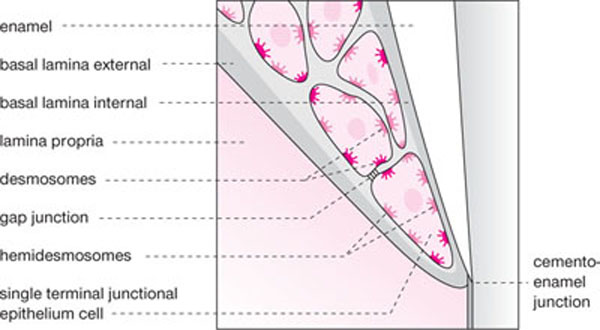 The presence of a plaque-free zone (PFZ) corresponding to the JE was first reported to be present on extracted teeth in the 1940s. Subsequent studies demonstrated that three zones can be identified within this PFZ: a narrow, permeable coronal zone with few JE cell remnants, a middle adhesive zone where many JE cell remnants are visible and an apical zone in which the JE cells have germinative characteristics. The studies showed that the width of the JE is variable, and that it is widest around the molars and narrowest around incisors. The JE generally decreases as the loss of attachment (LOA) and pocket depth increase. The base of the JE is confluent with the most coronal extent of the periodontal connective tissue attachment level, an important landmark (Fig 1-3).

In children free from periodontal disease, it would be expected that the periodontal connective tissue attachment level would be at the CEJ on the fully erupted tooth and that the epithelial attachment would be located on enamel. The molar tooth in Fig 1-5, extracted due to caries in a teenager, has been stained with Gomori’s stain for one minute. Two grooves can be seen that mark the gingival margin mid-buccally and mesiobuccally prior to extraction. Supragingival plaque is evident on the crown of the tooth that has a wide PFZ corresponding to the previous location of the JE. A band of adhesive JE cell remnants in the middle of the PFZ is visible. After extraction, some of the periodontal fibres remain in the tooth socket while the rest adhere to the tooth root. It can be seen that the periodontal fibres are attached right up to the CEJ, showing that there has been no LOA. This healthy status can be maintained through the teenage years to adulthood (see Fig 1-3).

The predominant tissues of the gingiva and periodontal ligament are the connective tissues that principally comprise collagen fibres (60%), with fibroblasts (5%), blood and lymph vessels, nerves and extracellular matrix forming the rest. The gingival collagen fibres are organised into bundles, which are named according to their course and insertion (Figs 1-6 and 1-7): 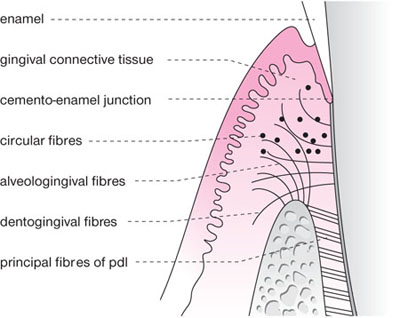 Fig 1-6 Schematic view of principal collagen fibre groups of the connective tissues of the gingiva. 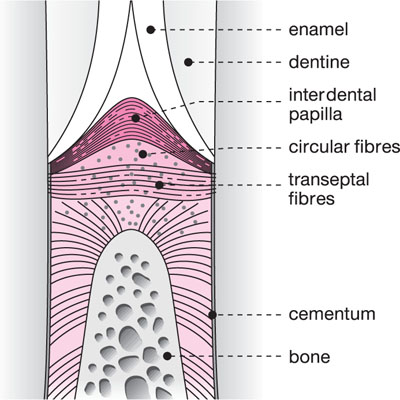 Fig 1-7 Schematic view of the interdental area showing the transseptal fibres and a cross-section of the circular fibres.

The periodontal ligament (PDL) has several functions, the most important being to provide attachment between the root cementum and alveolar bone. It resists the forces applied to the tooth and thus protects the nerves and blood vessels at the root apex from damage during function. The PDL is responsible for the mechanisms by which the tooth attains and maintains its functional position after eruption, including the phenomenon of tooth drifting that may occur as a consequence of periodontal destruction. Cells from the PDL have a role in the formation, maintenance and remodelling of alveolar bone and cementum. Mechanoreceptors in the PDL provide sensory input for reflex jaw activities.

The periodontal ligament fibres (Fig 1-8) are grouped into: 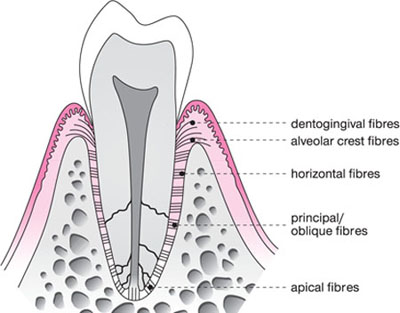 The portions of the principal periodontal ligament fibres that are embedded in the cementum and alveolar bone are called Sharpey’s fibres.

Cementum can be classified into two types according to the presence or absence of cells (Fig 1-9): 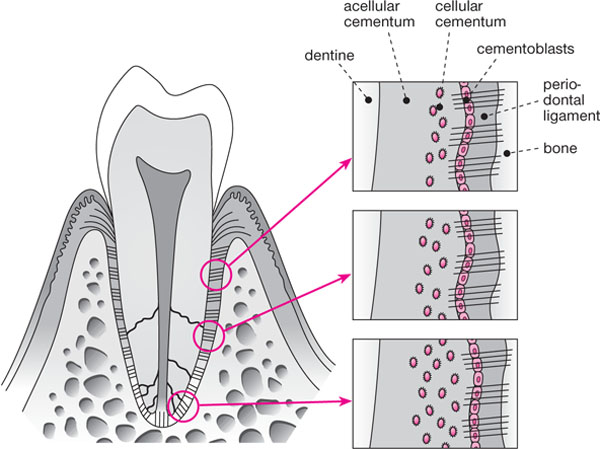 The alveolar bone is that part of the maxilla or mandible that supports and protects the teeth. There are two types of bone: compact (cortical) bone is dense and solid; spongy (cancellous) bone contains a lattice of bony trabeculae. The external and internal alveolar plates on both the buccal and the lingual surfaces are formed of compact bone, while in between is a variable amount of spongy bone. Posteriorly, the external alveolar plate is 1.5–3.0mm thick but is thinner and more variable around the anterior teeth. The thickest cortical bone is on the buccal aspect of the mandibular molars, whereas the thinnest is on the mandibular incisors. This anatomical variation accounts for two clinical phenomena.

The tooth sockets are lined by a thin layer of compact bone that provides attachment to some of the principal periodontal ligament fibres. Radiographically, this bone appears as a dense white line that is called “lamina dura”. Studies carried out by Clerehugh’s group (in conjunction with Hausmann’s team in Buffalo, USA) have shown that in healthy teenage subjects with no />