1: Pain and Anxiety in Dentistry

chapter 1 Pain and Anxiety in Dentistry

I am writing to you in hope that you can give me some information on dentists who use conscious sedation in their practice. In reading the Los Angeles Times article June 4, 1984 … I finally found the right course I could take to get my teeth worked on.

For the last 5 years I have been trying to find a solution to my problem. I have an overwhelming fear of dentists and a very sensitive mouth. When I read the article and found out about various types of anesthesia that are available to dentists, I found light at the end of the tunnel. I do not, however, know how to find these dentists who are trained in the field … I would appreciate any help you can give me.

The writer of the preceding letter is unusual, not because of her fear of dentistry, because she was able to write this letter in an effort to seek help for herself.

Thank you for recommending Xxxx, DDS, when I explained to you I was in need of dental work, probably for a root-canal as described by my current dentist who was not proficient in the use of nitrous-oxide, and that I am a very apprehensive and squeamish patient.

I would never have been able to even make the appointment without assurances from all that the procedure would be painless and that this dentist had the skills to curb my anxieties. Your recommendation and assurances are much appreciated.

Fear of dentistry has been recognized for many years. A 1987 survey of 1000 adult Americans rated “going to the dentist” second only to “fear of public speaking” as the most common fear1 (Figure 1-1). Hollywood movies, such as Marathon Man (1976), Little Shop of Horrors (1986), and The Dentist (1996), exaggerated the evil and sadistic qualities of our profession. 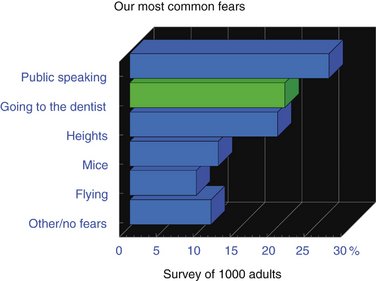 Fear of dentistry is real, it is palpable, and it is a problem.

Many adults in North America still avoid visits to the dentist out of fear.

In the United States, it is estimated that somewhere between 6% and 14% of the population (14 million to 34 million persons) voluntarily avoid seeking dental care because of their fear of dentistry.2 These individuals delay treatment until they are in such pain that home remedies are no longer effective. They are categorized as severely anxious patients and represent a dual problem in management because the dentist will have to treat both the patients’ acute dental problem (usually pain and infection) and their psychological emergency. I once gave a speech titled “The Pain of Fear.”3 This title aptly describes the dilemma faced by the acutely fearful dental patient. Fear of pain keeps the patient from seeking needed dental care until the pain, which is exacerbated by this fear, ultimately forces the patient to the dental office. Such patients present the dentist with a significant problem. Attempts to treat these patients without addressing their fear usually lead to great frustration and increased stress for the dentist and an increased level of fear for the patient.4 Kahn, Cooper, and Mallenger5 surveyed a group of dentists and reported that 57% of those responding stated that the most stressful factor in their dental practices was the “difficult patient.”

Much more typically seen than the person with severe anxiety—the vast majority of those seen in the dental office—is the patient who does not harbor any irrational fears* of dental treatment. However, this patient does experience a degree of heightened anxiety as the scheduled dental appointment nears. This apprehension over the forthcoming dental treatment does not prevent the patient from appearing in the office because this patient is genuinely concerned about maintaining oral hygiene and does not want to experience the pain of a toothache. This patient is categorized as having low to moderate anxiety and will appear on a regular basis for scheduled care because such a patient knows that avoidance of needed dental treatment will only lead to more significant (and painful) problems later. However, while in the dental office, this patient has somewhat sweaty palms and a more rapid heartbeat and admittedly would much rather be somewhere else.

* The terms fear and anxiety are often used interchangeably, as is the case in this text. However, there is a distinction to be made between them.

Fear tends to be a short-lived phenomenon, disappearing when the external danger or threat passes. It includes a feeling that something terrible is going to happen; physiologic changes, including tachycardia, profuse perspiration, and hyperventilation; and overt behavioral movements, such as becoming jittery or shaking. These clinical manifestations comprise what is called the “fight or flight” response.2,6

Anxiety, in contrast, is not likely to be dispelled as quickly. The emotional response is usually an internal one and is not readily recognized. Weiss and English7 define anxiety as “a specific unpleasurable state of tension which indicates the presence of some danger to the organism.” Anxiety tends to be a learned response, acquired from personal experience or secondarily through the experiences of others. Anxiety arises from anticipation of an event, the outcome of which is unknown.8

Milgrom et al2 state that a major difference between fear and anxiety is the immediacy of the threat to the person. A response to an immediate threat is fear. Properly used in the dental situation, the term anxiety describes reactions that develop in anticipation of or at the thought of dentistry, whereas fear refers to the reaction occurring at the dental office.

In 1972 the Ad Hoc Committee on Research and Faculty Training in Pain Control in Dentistry9 reported that “the threat and fear of pain constitutes one of the great obstacles to the acceptance of dental services in the United States, considered by some to be greater than the financial barrier.” With the arrival of prepaid dental care and health insurance coverage for many millions of Americans, it has become quite obvious that it is not only the financial aspect of dental care that prevents patients from seeking treatment.

If this is so, then we in the dental profession have been neglecting a very important aspect of the management of our patients. With the great technical advances that have been achieved in dentistry in recent years, all areas of dental treatment can be undertaken with greater skill, a greater degree of accuracy, less trauma, and can be completed in less time. Yet despite these advances, the problems of fear and anxiety persist.

A large part of the problem can be assumed to be a carryover from the recent past when many dental patients were severely traumatized both physically and psychologically in the process of receiving routine dental care. Because of the lesser degree of scientific knowledge available at the time, a certain level of discomfort (pain) was to be expected. “Grin and bear it” was a commonly heard cliché.

The traumatized children of that era are the adults of today, and because they carry with them many psychological scars and bitter memories of “going to the dentist,” today’s dental professional is faced with a multiplicity of management problems when these patients appear for treatment.

Anxious patients present a problem to the dentist not only when they appear for treatment, but also when their children require treatment. Anxiety is contagious, and even though apprehensive adults will usually ma/>