1.3.9 Modification of the pattern offacial growth

This chapter describes, in general terms, the prenatal development and postnatal growth of the craniofacial skeleton, and the occlusal development of the primary and permanent dentitions.

Understanding of embryological development is essential for the dental practitioner who may frequently face patients with the common craniofacial anomalies such as cleft lip and/or palate. For routine care, an understanding of their development and aetiology will bring insight to their likely presenting signs and symptoms.

This section will include a brief summary of the development of the face including the neural crest and pharyngeal arches. It is not the intention of this summary to be in any way a complete or thorough description but simply to describe some of the key cells/interactions and structures.

Neural crest cells are derived from the neural fold, and are highly migratory and specialized cells capable of predetermined differentiation. The differentiation occurs after their migration and is essential for the normal development of face and teeth (Fig. 1.1).

By week 4 the primitive mouth or stomatodeum is bordered laterally and from the developing heart inferiorly by the pharyngeal or branchial arches (Fig. 1.2). These are six bilateral cylindrical thickenings (although the fifth and sixth are small) which form in the pharyngeal wall and into which the neural crest cells migrate. They are separated externally by the branchial grooves and internally by the pharyngeal pouches. The first groove and pouches are involved in the formation of the auditory apparatus and the Eustachian tube.

Each arch has a derived cartilage rod, muscular, nervous, and vascular component. The first two arches and their associated components are central to the development of the facial structures.

This period is also characterized by the development of the organs for hearing, sight, and smell, namely the otic, optic, and nasal placodes.

By the end of week 4, thickenings start to develop in the frontal process. The medial and lateral frontonasal processes develop from these, together with the nasal placodes. 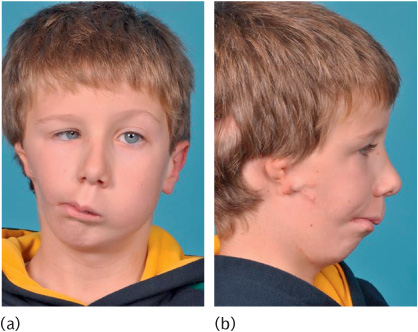 Figure 1.1 A child with the hemifacial microsomia part of the oculo-auricular-vertebral spectrum. The unilateral inhibition of neural crest migration and bronchial arch development results in (a) marked asymmetry and (b) ear defects.

The maxillary process develops from the first pharyngeal arch and grows forward to meet the medial and nasal processes, from which it is separated by distinct grooves at week 7 (Fig. 1.3). Its eventual fusion with them creates the upper lip and, from the two medial nasal processes, the incisor teeth and the primary palate. Where this fusion is disturbed a cleft of the lip may form (Fig. 1.4).

The lower lip is formed by fusion of the mandibular process from the first arch.

Development of the secondary palate starts around week 7. It is formed from three processes: the nasal septum develops in the midline from the frontonasal process and the two palatine shelves develop from the maxillary processes. At this stage the palatal shelves are directed downwards on either side of the tongue. Between weeks 7 and 8 they elevate to meet the primary palate and nasal septum, to which they fuse (Fig. 1.5).

The trigger for this elevation is still unclear, although high concentrations of glycosaminoglycans which attract water and increase turgidity in the shelves, contractile fibroblasts, and the position of the tongue have all been implicated. Once in contact, the epithelial covering of the shelves must disappear to allow the fusion. Various methods including cell death (‘apoptosis’) and cell transformation have been suggested as methods by which this epithelial covering is lost. 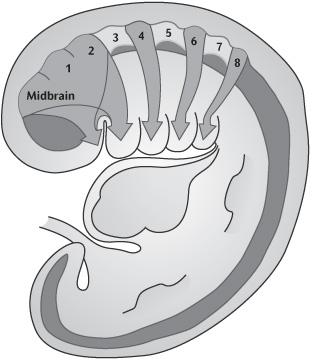 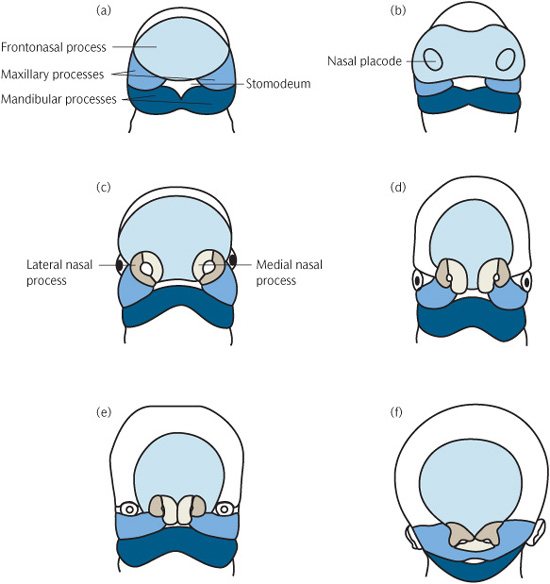 If the shelve fusion fails, this is likely to result in clefts of the palate. The extent of these clefts varies clinically from submucous clefts affecting the bony structure of the palate and underlying muscular attachment and clefts of the soft palate which may or may not have significant effects on speech to those including the hard palate producing communication between the nasal and oral cavities (Fig. 1.6).

There appear to be distinctive differences between clefts of the palate and those of the lip and palate within different geographical and sexual distributions. This also suggests different disruptive mechanisms and timings as lip closure occurs earlier in development than palatal fusion. However, as clefts of the palate alone and lip with palate can occur in certain families, it suggests the distinction may not be complete. 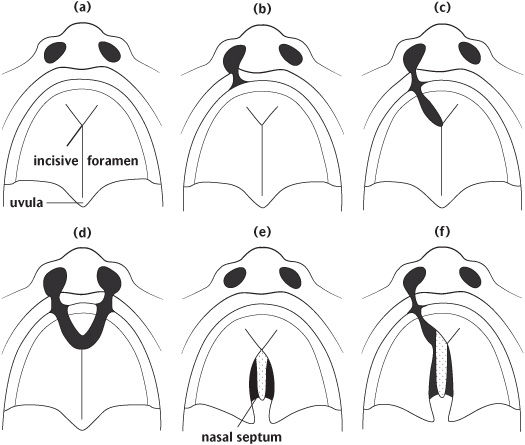 There is a great deal of individual variation in the process of postnatal growth and in the final form of the craniofacial structures. This section presents a simplified and rather idealized account of bone growth in general and as part of craniofacial growth. Occlusal development is then described, before going on to discuss the effect of individual variation in producing departures from this idealized pattern.

An individual’s stature can be charted on standard growth charts during growth. This will present an overall view of the process of growth and will help to detect instances where growth is not proceeding in the usual manner. However, it disguises the fact that the various tissues of the body grow at different rates at different ages (Fig. 1.7).

In order to maintain harmonious facial growth, bone growth must synchronize with that of other tissues. For example, growth of the calvarium is linked to growth of the brain. The cranial vault initially grows much more rapidly than the facial bones in order to keep pace with the developing brain, 90% of which is complete by 5 years of age. 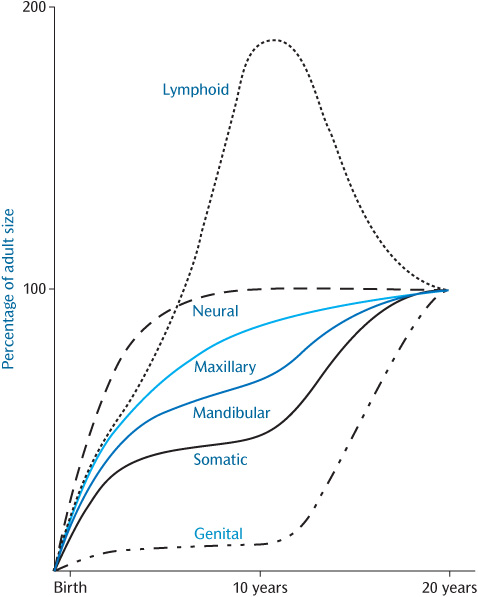 Figure 1.7 Postnatal growth patterns for neural, lymphoid, somatic, and genital tissues shown as percentages of the total increase. The patterns for the maxilla and mandible are shown in blue. (This was originally redrawn from Proffit, W.R. (2000). Contemporary Orthodontics, 3rd edn, Mosby.)

One way of assessing the changes that take place during craniofacial growth is to superimpose tracings of two lateral skull radiographs taken of the same person at different ages. The two radiographs can be compared, as shown in Fig. 1.8, and the changes that have taken place during growth can be examined. A potential difficulty with this approach is that the various bones of the skull grow at different rates at different ages, and there is no single central point about which growth occurs in a radial fashion, i.e. there is no valid fixed radiographic landmark on which to superimpose the films. One convention is to superimpose the tracings of the radiographs on the outline of the sella turcica, using the line from the sella to the frontonasal suture to orientate the films. If this method of superimposition is used, it appears that the cranium expands in a more or less radial fashion to accommodate the brain and the facial skeleton then grows downwards and forwards, away from the cranial base.

Soft tissue growth and facial changes are also important for understanding the effects of underlying bony changes. Although computed tomography will capture the soft tissue, it does not accurately depict the colour and texture and, particularly in the case of conventional computed tomography, produces a significantly higher radiation dose than plain radiographs. 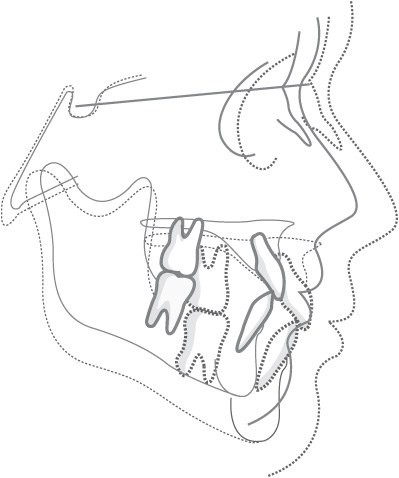 Figure 1.8 Superimpositions on the cranial base showing overall downward and forward direction of facial growth: solid line, 8 years of age; broken line, 18 years of age. (Reproduced from Mitchell, An Introduction to Orthodontics, 2007, with permission of Oxford University Press.)

Non-invasive laser scanning or stereophotogrammetry is capable of producing photo-realistic topography of the facial soft tissues without exposure to radiation. Sequential capture is being used for longitudinal growth studies where colour mapping can help illustrate areas of maximum growth (Fig. 1.10) over a substantial time period.

Figure 1.9 Cone-beam computed tomography of a child with a cleft of the alveolus, manipulated to produce a three-dimensional image.

Growth in bones formed by endochondral ossification occurs at growth centres known as epiphyseal plates in long bones and synchondroses in the cranial base. These are primary growth centres within which the chondroblasts are aligned and clear zones of cell division, hypertrophy, and calcification occur. The most notable of the three synchondroses within the cranial base is the spheno-occipital synchondrosis. The condylar cartilage has a different histological appearance to that of the epiphyseal plates and synchondroses. Although capable of producing bone, its stimuli appear more reactionary to growth around it rather than the primary growth sites which react to both internal and external stimuli.

The apparent growth of the facial bones is a function of remodelling and displacement or translation. Remodelling results in an alteration in the size and shape of bones by deposition and resorption of material on the external and internal surfaces of the bone and suture systems. It is a function of the ‘periosteum’ or ‘osteogenic membrane’. Deposition and resorption go hand in hand; one seldom occurs without the other. Deposition of bone on one aspect of a cortical plate of bone is accompanied by resorption on the other aspect. Displacement or translation occurs when one bone is moved relative to another, primarily due to another area of growth; for example, the maxilla is translated downwards and forwards by growth of the spheno-occipital synchondroses and nasal septum. Such translation will be accompanied by a degree of remodelling. 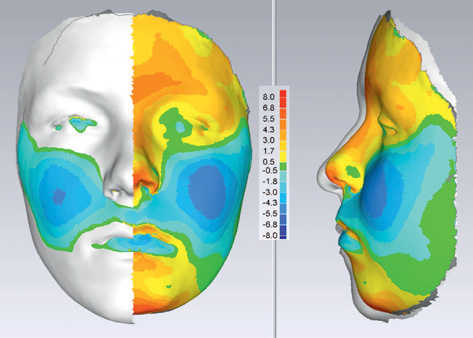 The suture systems allow the bones to respond to growth in neighbouring soft tissue. The suture systems lying between the maxilla and the cranial base allow the downward and forward translation of the maxilla in response to the growth of the soft tissues of the face. It is not proliferation of the vascular connective tissue in the sutures that pushes the bones apart; the whole arrangement of the connective tissue in a suture seems to be designed to enable the suture to respond to a tensile force.