Viral hepatitis, common with acquired immune deficiency syndrome (AIDS), is one of the few blood-borne viral hazards that the dentist has to contend with in his practice. Although the AIDS epidemic has aroused the greatest concern regarding disease transmission, hepatitis B infection can be more dangerous to the patient and the dentist, because of the relatively high infectivity of hepatitis B virus compared with human immunodeficiency virus (HIV). Hepatitis A occurs in parts of the world where sewage disposal measures and food hygiene are unsatisfactory. Although the transmission of the virus might rarely occur via contaminated needles, it is usually contracted by the faecal-oral route through contaminated food and water. Hepatitis B virus is usually spread by the parenteral route rather than the faeco-oral route. Non-A non-B (NANB) hepatitis has also been recognized. This disease, sometimes called hepatitis C, occurs most commonly after blood transfusion and parenteral drug abuse. However, delta hepatitis is caused by a recently discovered “defective” RNA virus, which coexists with the hepatitis B virus.

A clear understanding of viral hepatitis, especially that caused by hepatitis B virus, is essential for all dental practitioners, particularly in view of the serious sequelae of the disease and the potential risk of transmitting the infection to patients by the dentist and vice versa.

Viral hepatitis, in common with AIDS, is one of the few bloodborne viral hazards the dentist has to contend with in his practice. Although the AIDS epidemic has aroused the greatest concern regarding disease transmission, hepatitis B infection can be a much more real danger to both the patient and the dentist, due to the relatively high infectivity of hepatitis B virus compared with HIV. Furthermore, an unknown, but none the less significant number of dentists in the Western world have either contracted viral hepatitis from, or disseminated the infection to patients. In contrast, to date there is only a single documented instance where a dentist is believed to have become infected with HIV during dental treatment.

The term ’viral hepatitis’ is commonly used for several clinically similar diseases which cause inflammation of the liver but are epidemiologically and aetiologically distinct (Table 15.1). Two of these, hepatitis A (formerly called infectious hepatitis) and hepatitis B (formerly called serum hepatitis) are well characterized, while a third, non-A non-B hepatitis, is thought to be caused by at least three different agents. These viruses, together with the relatively recently discovered delta virus, are of concern in dentistry as they are responsible for the great majority of viral liver diseases. Table 15.2 shows the main differences between the hepatitis caused by hepatitis B, non-A non-B and delta viruses. It is worth remembering that hepatitis caused by the above agents are clinically indistinguishable, although they possess other differences. 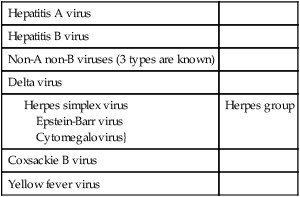 Epidemiological and clinical features of three types of hepatitis viruses

The major emphasis of this chapter will be on hepatitis B. However, hepatitis A is discussed below and non-A non-B and delta hepatitis are briefly described at the end of the chapter to outline their relevance to dentistry.

The viral agent of hepatitis A (also called infective hepatitis or short incubation hepatitis) is a small, 27 nm, RNA virus that belongs to the Picornavirus group, which also includes poliomyelitis and Coxsackie viruses. The virus is inactivated by ultraviolet light, exposure to water at 100 °C for 5 min and by exposure to 2% glutaraldehyde for 15 min.

Hepatitis A occurs particularly in parts of the world where sewage disposal measures and food hygiene are unsatisfactory. Although the transmission of the virus may rarely occur via contaminated needles, it is usually contracted by the faecal–oral route through contaminated food and water. Children and young people are most often infected and for this reason a history of hepatitis in childhood would, in most instances, be indicative of a hepatitis A infection rather than hepatitis B.

Passive immunization by hyperimmuneglobulin is effective against clinical illness, particularly when administered in the early incubation period. However, the main use of short-term, pre-exposure prophylaxis is for travellers to hepatitis A endemic areas, such as some parts of the Third World. A successful vaccine for hepatitis A has not yet been developed.

Hepatitis B infection is caused by the hepatitis B virus (HBV), a DNA hepadnavirus which is structurally and immunologically complex. Electron microscopy of HBV reveals three distinct particles, 42 nm Dane particle (the complete infective virus), 22 nm spheres, and tubular forms 22 nm in diameter and 100 nm in length (Figure. 15.1).

The surface of the hepatitis B virus consists of a distinct protein antigen, hepatitis B surface antigen (HBsAg). Overproduction of this surface component within the liver cell cytoplasm generates the non-infectious smaller spheres and tubules which circulate freely in the serum for prolonged periods after the acute episode. Indeed, it is these non-infectious HBsAg particles, abundantly present in plasma of infected individuals, which are the effective component of the plasma-derived hepatitis B vaccine.

The central core of the hepatitis B virus consists of single-stranded DNA, an enzyme (DNA polymerase) and a core antigen (HBcAg). Although this antigen is rarely found in serum, a breakdown product of HBcAg, termed ‘e’ antigen (HBeAg), may be found in serum and is a marker of active infection. The terminology of hepatitis B virus-associated serological markers is given in Table 15.3.

Epidemiology of hepatitis B