Fig. 9.1
Discoplasty for correcting an anteriorly displaced disc. After exposure of the joint and isolating the disc, a wedge of retrodiscal tissue is excised. When this area is sutured, it places the disc back into its normal anatomic position 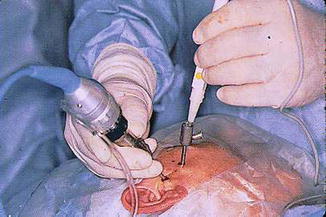 Fig. 9.2
Arthroscopy of the temporomandibular joint. The arthroscope, which has a camera attached to a TV monitor, is inserted through a cannula into the joint. This permits visualization while using surgical instruments inserted via the second cannula
However, all of this changed in 1991 with the introduction of arthrocentesis [5]. This involved the placement of two hypodermic needles into the upper joint space through which the joint could be lavaged, as in arthroscopic surgery, and the adhesions were eliminated and joint mobility was improved by manual manipulation of the mandible (Fig. 9.3). Thus, the same goals as for arthroscopic surgery were accomplished in an even less invasive manner. Moreover, a comparison of the two procedures showed similar success, with arthrocentesis being simpler, less expensive, and having fewer complications [6–9]. The only difference was not being able to actually visualize the joint, but this is generally not necessary. Therefore, arthrocentesis has now become the initial treatment of choice for TMJ locking. If it fails, arthroscopic surgery, discoplasty or discectomy may then be indicated.

Fig. 9.3
Arthrocentesis of the temporomandibular joint. (a) Placement of two hyperdermic needles into the upper joint space to allow irrigation of the joint. (b) Manual manipulation of the mandible during joint irrigation to break up adhesions and increase joint mobility

9.2 Orthognathic Surgery and the TMJ

9.2.1 Orthognathic Surgery as a Cause of TMJ Problems

There have been numerous reports on the development of various signs and symptoms such as clicking, crepitation, persistent joint pain and tenderness, limitation of mouth opening and condylar resorption arising in previously asymptomatic patients following orthognathic surgery [10–21]. Their prevalence has ranged anywhere from 4 to 60 %, depending on the conditions studied (Table 9.1). Thus, there is no doubt that orthognathic surgery can cause TMJ problems in some patients. The question then is: Are there things that can be done to prevent, or at least reduce, such problems?
Table 9.1
Prevalence of new TMJ symptoms in previously asymptomatic orthognathic surgery patients
There are four groups of patients that are at the highest risk for developing postoperative TMJ symptoms, especially internal derangements and condylar resorption, as a result of changes in condylar position during orthognathic surgery. These include high angle mandibular retrognathic patients, particularly young females; patients with an associated anterior open bite; patients requiring superior repositioning of the maxilla, which results in an autorotation of the mandible; patients with mandibular asymmetry who will require axial rotation of the mandible; and patients needing a mandibular setback of more than 9 mm. Thus, it is important that excessive changes in condylar position be avoided in such patients, especially following a bilateral sagittal split osteotomy (BSSO). There are a number of factors that can affect proper manual repositioning of the condyles during this operation. These include the supine position of the patient, the reduced muscle tonus, the direction of the surgical mandibular movement, and whether the condyles are positioned in centric occlusion or centric relation. Once the condyles are manually positioned, how they are fixed in that position is also a crucial factor. Because of the u-shape of the mandible, both advancement and setback produce a changed axial relationship between the proximal and distal segments and a resultant lateral condylar rotation can occur as a result of the improper application of rigid fixation (Fig. 9.4). 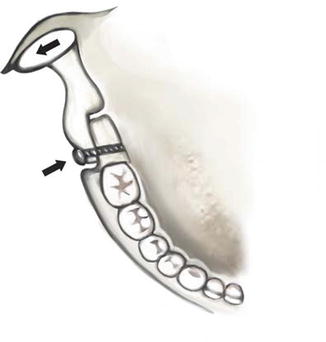 Fig. 9.4
Potential lateral displacement of the condyle following a sagittal split osteotomy caused by improper fixation screw placement
The desire to place the condyles back in their exact preoperative position following orthognathic surgery has led to the use of condylar positioning devices by some surgeons [22] (Fig. 9.5). However, others have questioned the necessity to have such accurate positioning, arguing that anecdotally most patients have minimal or no dysfunction with closed reduction of displaced subcondylar fractures. Also, the procedure known as condylotomy, which changes the position of the condyle, has actually been used to treat some TMJ disorders [23]. In a comparison study, Gerressen et al. [24] treated 28 patients by mandibular advancement, of which 18 had manual condylar repositioning and 10 had a repositioning device used, and 21 patients by mandibular setback, of which 10 also had a repositioning device used. They found that in the advancement patients the manually positioned group had fewer signs of temporomandibular disorders (TMDs), and in the setback patients there was no significant difference. Furthermore, in a review of 11 studies on the use of condylar positioning devices in orthognathic surgery, Costa et al. [25] found no scientific evidence to support the routine use of such devices. It can therefore be concluded that although excessive malposition of the condyle can lead to postoperative relapse, and therefore should be avoided, lack of exact condylar positioning is not a factor in causing TMDs in orthognathic surgery patients.

Fig. 9.5
Condylar positioning technique. (a) The bone plate is adapted prior to making the bone cuts. (b) Application of the bone plate after completion of the osteotomies repositions the condyle in its original position (Reprinted with permission from Ellis [22])

9.2.2 Orthognathic Surgery as a Cure for TMJ Problems

Studies have shown a higher incidence of TMDs in patients undergoing orthognathic surgery than in the general population [12, 15–17, 26–28], (Table 9.2) and this has led to the idea that malocclusions and skeletal deformities can predispose to such problems. For example, it has been claimed anecdotally that there are increased compressive forces on the mandibular condyle in Class II patients with a high mandibular plane angle and an anterior open bite or in those with a low angle deep bite. Although the literature often cites such malocclusions and skeletal deformities as contributing to TMDs, this information is based mainly on opinion and weak correlative data; no controlled studies have proven this relationship. Nevertheless, orthognathic surgery is often recommended as a treatment for TMDs [15–17
Only gold members can continue reading. Log In or Register to continue