Orthognathic Injuries of the Trigeminal Nerve

Fig. 8.1
Vertical ramus osteotomy is performed posterior to the mandibular foramen (lingula region) to avoid injury to the IAN
The SSRO divides the mandible in the angular region of the ramus and body of the mandible. Between a medial horizontal cut on the ramus and a lateral vertical cut in the molar region, the mandible is split sagitally, ideally along the inner surface of the lateral cortex (Fig. 8.2). This osteotomy can be used for mandibular setback, advancement, and rotational movements. The proximal and distal bone fragments can be fixated with osteosynthesis of various types; therefore, IMF is not needed in the postoperative period. There are many possible risk factors for nerve injury resulting from orthognathic surgery, and these are summarized in Table 8.1. 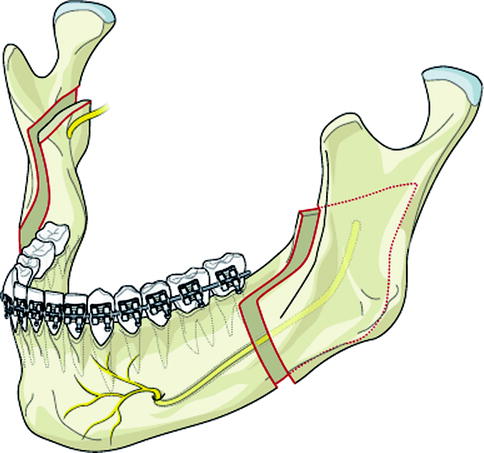 Fig. 8.2
Bilateral sagittal split ramus osteotomy places the IAN at risk for injury due to osteotomy design
Table 8.1
Risk factors for IAN injury during SSRO
In the genioplasty procedure, the anterior part of the mandible is cut more or less horizontally below and anterior to the mental foramen, and to a point approximately 1 cm above the symphyseal base (Fig. 8.3). This chin segment of the mandible can then be mobilized and fixated in a new position. In addition, this osteotomy does not disrupt the mandibular continuity. 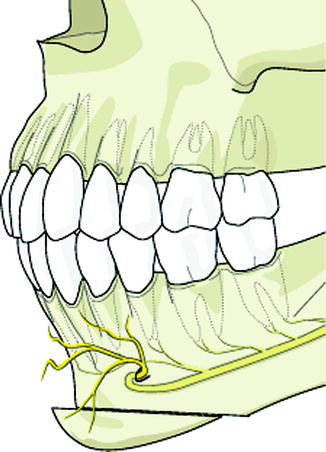 Fig. 8.3
Genioplasty procedure of the anterior mandible places the IAN and mental nerve terminal branches at risk for injury
Clearly, the SSRO, which splits the mandible along 2–3 cm of the mandibular body and ramus, must be considered as a high-risk procedure for the IAN coursing in the same bony structure, at least much more than the VRO and genioplasty, and this is also reflected in the literature.

One of the pioneers of SSRO, Hugo Obwegeser, discussed in a paper in 1964 [13] the indications for the procedure without even mentioning the risk of NSD as a result of the surgery. Later, numerous papers have indicated that SSRO might be followed by more than a minimal NSD of the lower lip and chin. Of interest is the extremely variable occurrence of NSD after SSRO reported in the literature. In his thesis [20] Westermark made a list of 35 papers published between 1974 and 1999, in which NSD of the lower lip and chin were reported from between zero and 85 % following SSRO surgery. It was not only the reported numbers that varied widely but also the method used to evaluate neurosensory function. Further, some authors reported per side NSD incidence, while others reported per patient incidence. Some authors with very low numbers of NSD performed their evaluation by testing the skin response with a sharp probe only. Patients who did not respond to such a stimulus were considered to have an NSD. The more sophisticated the evaluation methods used, the more NSD could be detected. This author compared subjective evaluation and objective assessment of neurosensory function in patients who, after SSRO, had a self-reported NSD of varying degrees [23]. The examination modalities used included the visual analogue scale (VAS), light touch perception, and perception thresholds of warm and cold temperatures. The results indicated that there was a relatively good positive correlation between subjective evaluation and objective assessment of the sensitivity of the lower lip and chin after SSRO of the mandible. In another paper in the same thesis this author reported on IAN function after mandibular osteotomies [21]. For SSRO the data was based upon 548 operated sides with a minimum follow-up time of 2 years. The neurosensory function was evaluated on a 5° scale, where 5, fully normal sensitivity; 4, almost normal sensation; 3, reduced sensation; 2, almost numb; and 1, numb. The distribution was the following: score 5, 61 %; score 4, 22 %; score 3, 14 %; score 2, 2 %; and score 1, 1 %. Interestingly, the two worst scores (scores 1 and 2), representing about 3 % of the operated sides, corresponded well with the previously mentioned reports, where NSD was considered present if the patient did not respond to sharp probing. With the low numbers in the two worst groups, these were added into group 3. Then, the figures indicated that of the operated sides 60 % had fully normal sensitivity of the lower lip and chin, 20 % had a very slightly reduced sensitivity, and 20 % had a reduced sensitivity. The difference between groups 2 and 3 was that in group 2, with a very slight neurosensory disturbance, the abnormal sensation was barely perceptible, while in group 3, the patients were subjectively aware of their NSD. The distribution of “60-20-20” fell very much in the middle of the previously mentioned list of reports and has been supported in later studies with a similar methodological approach.
What, then, is the cause of NSD after SSRO? As mentioned above, the SSRO procedure osteotomizes the mandible along a substantial part of the body, angle, and ramus regions. Therefore, it is generally thought that NSD follows direct trauma to the IAN during the actual osteotomy procedure. This author studied how NSD after SSRO correlated with intraoperative nerve encounter and other variables in 496 operations [22]. From the information contained in the surgical operative reports about nerve encounter during the splits, the nerve was described as one of the following: not exposed at all, visible in the medial fragment, free in between the fragments, dissected from the lateral fragment/superficial damage to the nerve, deep damage into the nerve trunk, and nerve transection. Other study variables included patient age, degree of mandibular movement, type of osteosynthesis used, and surgeon skill/experience. Patient age had a significant influence on the recovery of neurosensory function. The mean age of the patients in the study was 26 years, the median age was 22, and the 25 and 75 percentiles were 18 and 33 years, respectively. Both when the patient series was divided at the median and when the youngest and oldest quartiles were compared with the mid-half, there were significant differences in sensitivity scores. The largest differences were found between the youngest and oldest quartiles. The severity of the neurosensory disturbances was also increased with age.
Intraoperative nerve encounter, however, correlated with NSD to a much lesser degree than expected. While there were more NSD and more severe NSD among the sides where the nerve had been manipulated more extensively in the split, there were also many of those who demonstrated very good neurosensory function. Those sides where the nerves were embedded in the distal fragments did better than those with nerves embedded in the proximal segments (Fig. 8.4), but even among them, there were those with more or less severe NSD. All in all, the nerve encounter as such did not seem to be the only factor involved in the occurrence of NSD. It was suggested that the soft tissue dissection on the medial aspect of the ramus partly may compress the nerve over the lingula and under the dissecting instrument, and partly stretch the nerve between the two (Fig. 8.5). Lingual nerve injury is much less common than inferior alveolar nerve injury, but it may occur possibly from nerve ­manipulation on the medial ramus or from screw overpenetration during fixation of the proximal and distal fragments [19, 25].

Fig. 8.4
(a) IAN is visualized between the proximal and distal segments during an SSRO procedure. (b) The IAN is entrapped in the proximal segment; this is associated with a higher incidence of NSD following SSRO surgery

Fig. 8.5
Medial retraction during SSRO may cause IAN compression and contribute to postoperative NSD
Both compression and stretching of a nerve may seriously harm the nerve function. ­Interest­ingly, when the results of surgeons in training were compared with those of the consultant or attending surgeon, there was a significant ­difference in favor of the experienced surgeon. Realizing the relative difficulty with the soft tissue dissection, it might not come as a major surprise that the inexperienced surgeon might spend a longer amount of time there, and may run a larger risk of causing nerve compression and stretching during the dissection, and during the time it takes to perform the horizontal cut. Several attempts have been made to observe such dissection trauma, for example, by means of trigeminal somatosensory-evoked potentials (TSEP). With this neurophysiological testing modality, the nerve impulses along a nerve can be observed both during the dissection phase and under resting conditions. By monitoring TSEP [8], support for the idea that the soft tissue dissection on the medial aspect of the mandibular ramus might significantly compress the nerve was obtained. It was stated, however, that TSEP in the ­surgical setting could be obtained “only with some difficulty.”
Neither the type of osteosynthesis applied nor the direction or degree of mandibular movement played a significant role in the occurrence of postoperative NSD. When bicortical screws are used for the stabilization of SSRO fragments, care should be taken, of course, to avoid the course of the nerve trunk. Also, one should avoid using a lag screw technique, since this technique compresses the fragments toward each other, and there is a risk of nerve trunk compression. Also, there seems to be no difference in postoperative neurosensory function if the bone fragments after SSRO have been stabilized with metal or with biodegradable osteosynthesis [24].
The impact of age has been widely discussed in the literature. Not only the frequency but also the impact of NSD seems to be higher in advanced ages. The better outcome in the younger individuals may depend upon two ­factors. Partly, the young patient may possess a better capacity of nerve regeneration as such, and partly, the adaptation to a NSD may be easier in a young than in an elderly patient. Recently Baas et al. [4] ­demonstrated an age-related increase in NSD after sagittal split of the mandible. In the same paper they also found that there was no significant difference in neurosensory function after mandibular advancement done by sagittal split osteotomy or by distraction osteogenesis of the mandible. In another study of subjective paresthesia following 68 SSRO procedures [12], 62 % of patients had NSD at 2 months, 38 % NSD at 6 months, 32 % NSD at 18 months, and 24 % subjective paresthesia at 30 months. The most important factors included age >30, method of fixation (lag screw worse than mini-plate worse than wire fixation), and perioperative position of the IAN (worse if located in the proximal segment than the distal segment). In general the monocortical mini-plate permits passive contact of the proximal and distal segments without compression on the IAN (Fig. 8.6).

Fig. 8.6
(a) Panoramic radiograph demonstrating monocortical plate and screw fixation following SSRO surgery. (b) Intraoperative view of monocortical plate and screw fixation of an SSRO procedure. This technique helps to prevent unnecessary compression of the IAN between the bony segments (Courtesy of Michael Miloro)
Only gold members can continue reading. Log In or Register to continue