Hundreds of bacterial species inhabit the mouth [10]. However, because of bacterial interactions, nutrient availability, and low-oxygen potentials in root canals with necrotic pulp, the number of bacterial species present in endodontic infections are restricted [10]. These selective conditions lead to the predominance of facultative and strictly anaerobic microorganisms that survive and multiply, causing infections that stimulate local bone resorption, and are more resistant to endodontic treatment [10]. Among the types of bacteria that infect the root canal, Enterococcus faecalis (E. faecalis) is the one most commonly associated with failed endodontic treatment [11]. In addition to bacteria, the root canal can also be infected by viruses [12] and Candida albicans [13]. The disinfection of root canals through the elimination of microorganisms is an essential step in endodontic treatment (Garcia 3) [14] to help avoid subsequent failure (Garcia 10) [15]. Surface adherence by bacteria to form biofilms is a good example of bacterial adaptation and one that is pertinent to endodontic infections. Increasing information is now available on the existence of biofilm communities on root canal walls (Garcia 28) [16]. Unfortunately, complete root canal disinfection is difficult to accomplish; microorganisms can remain within the apical dentin plug (Garcia 15) [17], within the smear layer (Garcia 8) [18], and within the dentinal tubules (Garcia 18) [19]. To maximize the removal of microorganisms from the root canal, the shaping and mechanical enlargement of a root canal must be accompanied by copious irrigation (Garcia 10,13) [15, 20]. Disinfecting the root canal to reduce the quantity of bacteria, viruses, and fungus to low levels which cannot cause a flare-up is an important requirement of endodontic treatment.

Types and Dilutions of Irrigating Solutions

Fig. 7.1
Flow chart for diluting sodium hypochlorite as a root canal irrigating solution
Sodium hypochlorite has been the most widely used root canal irrigating solution for several decades, because it is inexpensive, can quickly dissolve infected necrotic tissues, and is bactericidal [30, 31]. It is very toxic to tissues when undiluted and so accidental spillage is always a concern among dentists [32, 33]. Moreover, sodium hypochlorite by itself cannot completely clean the surfaces of root canals, and it cannot remove the smear layer created by instrumentation [34]. A few dentists will use alternative root canal irrigating solutions to sodium hypochlorite, and these include chlorhexidine gluconate, an activated water called Aquatine Endodontic Cleanser, or a natural fruit juice extract such as Morinda citrifolia.
A 2 % solution of chlorhexidine gluconate (CHX) has good bactericidal properties to disinfect the root canal [35, 36]. CHX is a bis-bis-guanide with amphiphatic and antiseptic properties [37]. CHX is biocompatible to tissues [36] so it is less harmful when spilled. However, the use of CHX as an endodontic irrigant is generally restricted because it cannot dissolve infected necrotic tissues. CHX can also discolor the teeth [38], and if it is spilled a patient might experience side effects such as loss of taste, burning sensation of the oral mucosa, subjective dryness of the oral cavity, and discoloration of the tongue [39], and it is also less effective to dissolve necrotic infected tissues. Generally, chlorhexidine gluconate is not a good alternative irrigating solution to sodium hypochlorite, because even at full strength, its ability to clean the root canal surfaces is inferior to sodium hypochlorite (Yamashita et al. 1993) [40].
In August 2006, the US Food and Drug Administration approved Sterilox Dental’s Aquatine Endodontic Cleanser (Aquatine EC, Sterilox Puricore, Malvern, PA, USA) for use as an endodontic irrigating solution. The active component in Aquatine EC is hypochlorous acid (HOCl) [41]. HOCl is produced by the human body’s immune cells, through a chain of aerobic reactions called the oxidative burst pathway, to kill invading pathogens and to fight infection (Garcia 6) [42]. Aquatine EC is produced by electrochemically charging a low-concentration salt solution using an element reactor. HOCl is commonly used for hospital disinfection and sterilization and in the treatment of chronic wounds (Garcia 25) [43]. In dentistry, it is commonly used to disinfect water lines by removing biofilms (Garcia 7,12) [44]. HOCl is biocompatible to the tissues and antimicrobial against a broad range of microorganisms (Garcia 12) [45]. Two in vitro studies have demonstrated that freshly made HOCI solution can be effective as an endodontic irrigating solution (Garcia 27) [46]. However, there are no long-term clinical trials which have demonstrated that a HOCI solution is as effective as an irrigating solution as sodium hypochlorite.
Some patients and dentists are searching for natural irrigating solutions among plant extracts that have some bactericidal properties. Few plant extracts are suitable as an endodontic irrigating solution because they contain natural sugars which could feed bacteria infecting a root canal. The antimicrobial effects of natural fruit juices and plant extracts on E. faecalis and other endodontic pathogens have generally not been evaluated, except for the Arctium lappa plant extract, which was effective at disinfecting ex vivo root canals (6) [47], and fruit juice from the exotic Morinda citrifolia or noni plant (Garcia article + new article) [48, 49]. Morinda citrifolia juice (MCJ) has a broad range of therapeutic effects, including antibacterial, antiviral, antifungal, antitumor, anthelmintic, analgesic, hypotensive, anti-inflammatory, and immune-enhancing effects (Garcia 1–3) [14, 34, 50]. MCJ contains the antibacterial compounds L-asperuloside and alizarin (Garcia 4) [51]. Acetone extracts from MCJ also demonstrated some antimicrobial activity (5) [52].
While some fruit juices and plant extracts, especially from plant roots, may be appealing to the growing patient base who wants to have treatment only using natural remedies, these compounds are expensive, and there is no long-term clinical evidence that root canal irrigation with natural irrigating solution is beneficial.

A severe limitation of sodium hypochlorite and most other irrigating solutions is that they are unable to dissolve the instrumentation debris on cut dentin surfaces, called smear layer [53]. The smear layer is a 1–5-μm-thick layer of cut debris created on the surface of instrumented dentin, composed of dentin, odontoblastic processes, nonspecific inorganic contaminants, and microorganisms (Garcia 5) [54]. The smear layer can harbor infected necrotic tissue, bacteria, bacterial products, and root canal remnants [55]. The presence of smear layer can prevent the adequate sealing of the root canal with sealers, thereby creating pathways for bacterial leakage (Garcia 23) [6] which may lead to a failure of endodontic treatment. The presence of smear layer on the instrumented root canal surface and its removal with a common chelating agent are shown in Fig. 7.2. 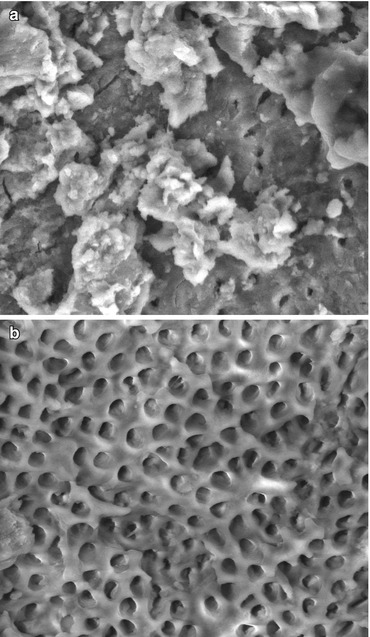 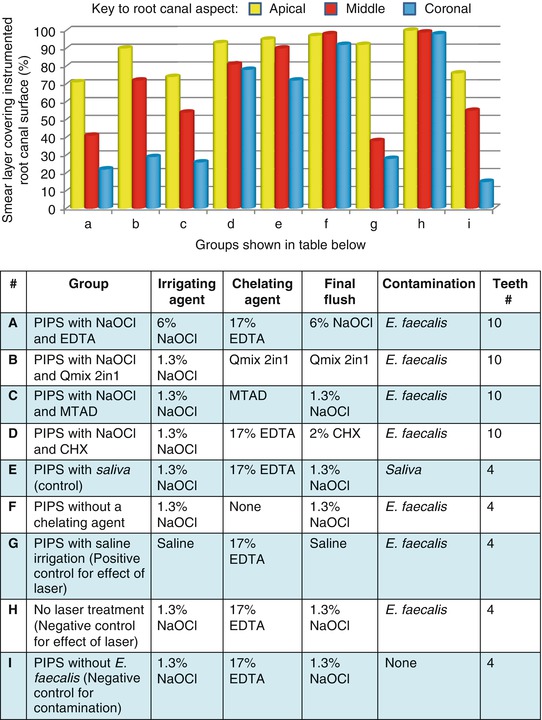 Fig. 7.3
A comparison of the effectiveness of irrigating solutions and chelating agents to remove smear layer from the instrumented canals of ex vivo teeth when activated with photon-induced photoacoustic streaming (PIPS)

The process of canal preparation with files, instruments, and irrigating solutions is usually sufficient to remove most of the necrotic and infected tissues. Some recent articles suggest that the ultrasonic activation of irrigating solutions [72] the use of highs-speed vacuum; the EndoVac system [73] and that a laser using photon-induced photoacoustic streaming (PIPS) can improve the debridement of root canals [74]. The effect of cleaning and shaping the root canals followed by PIPS is shown in Fig. 7.4. 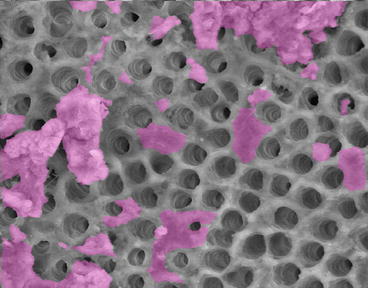 The root canals should be irrigated with sodium hypochlorite during instrumentation. Undiluted sodium hypochlorite is the most effective concentration, but it may be diluted according to the experience of the dentist or because a tooth is immature and has an open apex. It is not enough to use sodium hypochlorite to clean the root canals following instrumentation. A chelating agent is also needed; most dentists will use EDTA, although there are other effective products such as MTAD and Qmix available. The effectiveness of the irrigation solution and chelating agent to remove smear layer and to clean the canals can be improved by activating the solutions with ultrasonics, by high-speed suction such as the EndoVac system, or by a laser system such as PIPS.

Quiz for the Topics Covered in Chapter 7

1.
Hundreds of bacterial species inhabit the mouth, because of bacterial interactions, nutrient availability, and low-oxygen potentials in root canals with necrotic pulp; the number of bacterial species present in endodontic infections is restricted.
(a)
False
(b)
True
2.
These selective root canal environmental conditions lead to the predominance of facultative and strictly anaerobic microorganisms that survive and multiply, causing infections that stimulate local bone resorption, and are more resistant to endodontic treatment.
(a)
False
(b)
True
3.
The instrumentation of the root canal alone is not sufficient to remove infected necrotic tissues.
(a)
False
(b)
True
Only gold members can continue reading. Log In or Register to continue