iatrogenic adj. Describing an unforeseen or unwanted side-effect of treatment provided by a health professional.

ibuprofen n. A proprionic acid derivative in the non-steroidal anti-inflammatory drug (NSAID) category. It binds extensively to plasma proteins and is rapidly absorbed following oral administration. It has *analgesic, anti-inflammatory, and *antipyretic properties and is used in the treatment of musculoskeletal, dental, and rheumatic pain. It is also a popular post-operative analgesic. Trade names: Brufen, Fenbid, Junifen, Nurofen.

identification dot A small elevation or pimple on the corner of a radiographic film used to indicate the surface of the film facing the x-ray tube during exposure.

idiopathic adj. (n. idiopathy) Describing a disease or medical condition of unknown cause or which occurs spontaneously.

idiosyncrasy n. (adj. idiosyncratic) An unusual and unexpected sensitivity reaction by an individual to a particular food, drug, or cosmetic. Drug idiosyncrasy occurs when the standard dose causes an excessive response.

imbibition n. (v. imbibe) The absorption of liquid by a solid or a gel. For example, *glass ionomer cement undergoes imbibition of water during its early setting phase.

imbrication n. (in dentistry) Anterior teeth in the same arch which overlap each other. Imbrication lines are mesio-distal ridges on the cervical third of the labial surface of an anterior tooth associated with enamel incremental growth formation. See also STRIAE OF RETZIUS.

immune response (reaction) n. The bodily defence reaction of an organism that recognizes an invading substance (*antigen) such as a virus, fungus, bacteria, or transplanted organ, and produces an *antibody specific against that antigen. There are two types of immune response: B-lymphocytes (or B-cells) are responsible for humoral immunity producing free antibodies that circulate in the bloodstream; T-lymphocytes (or T-cells) are responsible for cell-mediated immunity.

immunity n. The ability of the body to resist infection due to the presence of circulating *antibodies and white blood cells. Natural (innate or non-specific) immunity is a defence mechanism which includes natural, mechanical, chemical, and biological barriers to infection and which has no degree of memory or specificity; it is present at birth prior to exposure to infective agents. Acquired immunity is achieved in response to foreign *antigens in the body and involves the production of *antibodies which react specifically with the foreign antigen. Active immunity is achieved when the body’s own cells produce and continue to produce appropriate antibodies in response to an infection or to artificial stimulation by the use of treated antigens to stimulate the body to produce its own antibodies (*immunization, *vaccination). Passive immunity is of short duration and occurs naturally at birth from maternal antibodies in the mother’s milk (colostrum) and placental blood or by the injection of antibodies contained in antiserum taken from another immune person or animal.

immunization n. The production of *immunity by artificial means. It may be achieved actively or passively.

immunodeficiency n. A condition resulting from a reduced or deficient *immune response. This may be a primary condition due to a defect in the immune system or a secondary (or acquired) condition as a result of a disease process such as *AIDS.

immunosuppressant n. A drug or agent that reduces the *immune response. They are useful in maintaining the survival of transplanted organs or tissues which would otherwise be rejected and destroyed by the immune response, and for treating certain *autoimmune diseases such as rheumatoid *arthritis.

impaction n. The condition of being tightly wedged together. Food impaction can occur between the teeth due to an open contact, a poorly contoured restoration, or the plunger effect of opposing teeth. Tooth impaction occurs when a tooth is prevented from erupting into a fully functional position. The preventing agent can be another tooth, alveolar bone, or soft tissues. The most commonly impacted teeth are third molars, second premolars, and canines; the impacted tooth may lie in a variety of different positions.

impairment n. Any loss or abnormality of psychological, physiological, or anatomical structure or function. It represents a deviation from a person’s usual biomedical state. An impairment is thus any loss of function directly resulting from injury or disease. A social model defines impairment as the functional limitation within an individual caused by restricted physical, mental, or sensory activity. Compare DISABILITY; HANDICAP.

impetigo n. A superficial bacterial infection of the skin. It is characterized by small pus-filled blisters that form a yellow crust, usually around the nose and mouth. Non-bullous impetigo is caused by Staphylococcus aureus or Streptococcus species or both, is highly contagious, and occurs mainly in young children. Bullous impetigo is caused by Staphylococcus aureus, is less contagious, and can occur at any age. Treatment is usually by topical antibiotics. 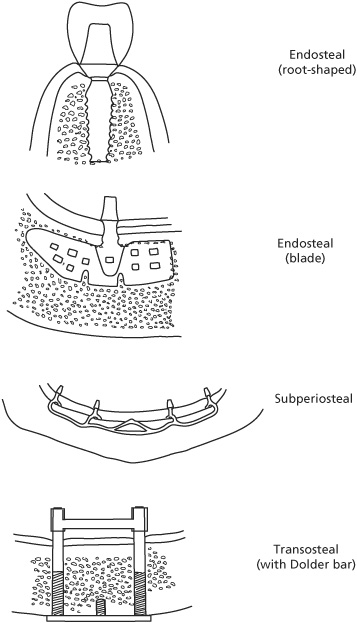 implantology (oral) n. A specialist branch of dentistry concerned with the surgical insertion of materials or devices into the hard or soft tissues of the oral cavity for the purpose of providing support or retention for tooth restorations or a prosthetic appliance.

implant restoration A restoration placed on an implant designed to restore normal function, aesthetics, speech, and comfort. It may be secured on the underlying implant by screw or cement retention, or a combination of the two. This allows the restoration to be removed for repair in the event of porcelain fracture, abutment fracture, or if the prosthesis needs to be modified such as when an implant has failed. The restorative prosthesis may consist of several units secured to a number of implants.

Impregum® n. The trade name for a *polyether impression material.

impression compound n. A material composed of fatty acids, shellac, glycerine, and filler used as a primary *impression material. When heated in a water bath at about 65°C (149°F) it becomes plastic and can be moulded in an impression tray and inserted in the mouth. The material becomes fairly rigid on cooling to mouth temperature and has low material flow at room temperature. It has a low thermal-expansion coefficient so that there is minimal dimensional change as the impression is cooled from mouth temperature and it does not adhere to moist oral tissue. It may be modified by the addition of an *alginate wash. Impression compound is usually used for taking primary impressions of the edentulous ridge prior to the construction of a custom-made *impression tray for complete *dentures. Impression compound is also available in sticks of various colours indicating different softening temperature ranges e.g. greenstick compound (composition); these are used for impression correction and moulding the borders of custom impression trays, particularly around muscle attachments.

impression tray n. A rigid receptacle in which impression material is placed. Materials commonly used for impression trays are metal, *shellac, or resin. They are usually coated with tray adhesive immediately prior to use and may be perforated with 2–4mm diameter holes or made from metallic mesh to improve the adhesion of the impression material to the tray. Stock trays are rigid trays commercially manufactured in different sizes and shapes and usually made of resin or metal. Edentulous stock trays have a shape which conforms to the shape of the edentulous ridge of either the mandible or maxilla. Dentate stock trays have a box shape to accommodate the teeth in the arch. Custom trays are made from a primary cast and, because their shape conforms more closely to the shape of the teeth and tissues to give a more uniform thickness of impression material, it provides greater dimensional accuracy. Custom trays are usually made from shellac or resin. A sectional tray is used to take an impression of a specific area of the dental arch such as a quadrant or sextant.

incipient adj. In an initial stage; beginning to become apparent.

incision n. 1. The act of making a cut in body tissue. 2. The cutting action of incisor teeth.

incisor, permanent mandibular central n. One of two teeth which are the smallest in the permanent *dentition located between the mandibular lateral incisors either side of the midline. They replace the mandibular primary central incisor teeth. It has a convex labial surface with a flattened area in the incisal half. The lingual surface is concave, except above the cervical margin where it is convex. Unlike the upper central incisors, there is no well-defined *cingulum and no definite marginal ridges on the lingual surface. The mesial and distal surfaces of the crown are triangular in shape, to give a wedge-shaped appearance, and are almost at right angles to the incisal edge. On *eruption, the incisal edge has three small tubercles (*mamelons), which wear away to give a flat surface. It has a single root, oval in cross-section and flattened on the mesial and distal surfaces. The apical region may show some degree of bifurcation. The *pulp chamber has two mesial and distal pulp horns directed towards the mesial and distal angles of the incisal edge. The root canal is subject to variation and may divide to give buccal and lingual canals. *Calcification of the tooth begins at about 3–4 months after birth and the crown is normally complete by 4–5 years of age. The tooth erupts at about 6–7 years and the calcification of the root is complete at about 9–10 years.

incisor, permanent mandibular lateral n. One of two teeth located between the mandibular central incisors and the canines in the permanent dentition. They replace the mandibular primary lateral incisor teeth. It is similar to the lower central incisor but is wider mesio-distally and therefore more fan-shaped. The lingual surface usually shows more definite mesial and distal marginal ridges. On *eruption, the incisal edge has three small tubercles (*mamelons), which wear away to give a flat surface. *Calcification of the tooth begins at about 3–4 months after birth and the crown is normally complete by 4–5 years of age. The tooth erupts at about 7–8 years and the calcification of the root is complete at about 10 years. 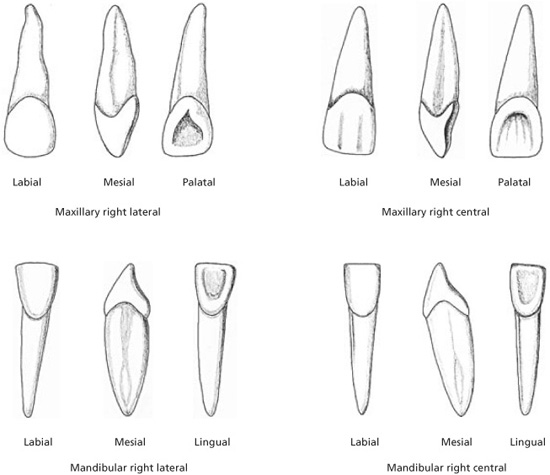 Tags: Dictionary of Dentistry
Dec 5, 2015 | Posted by mrzezo in General Dentistry | Comments Off on I
Premium Wordpress Themes by UFO Themes
WordPress theme by UFO themes