7: Notes on the Aetiology and Operative Management of Non-carious Tooth Tissue Loss. Erosion, Attrition or Abrasion?

Notes on the Aetiology and Operative Management of Non-carious Tooth Tissue Loss. Erosion, Attrition or Abrasion?

As caries experience generally declines and improvements in the treatment and management of periodontal disease continue, the population are retaining more functional natural teeth. As a consequence, practitioners are seeing more patients with non-carious tooth tissue loss, the treatment for which can be complex in its advanced stages. The aim of this section is to alert practitioners to the early signs of non-carious tooth tissue loss and to consider preventive regimes and early operative management of the condition with direct restorative materials.

On completion of this section practitioners will be able to diagnose non-carious tooth tissue loss (NCTTL) in its early stages and be familiar with the use of direct restorative materials in the early management of NCTTL.

NCTTL is defined as tooth tissue or surface loss due to a disease process other than dental caries. It is often termed tooth wear, which is technically a misleading term as it implies a purely abrasive basis for the disease. NCTTL is due to erosion, abrasion or attrition. Abrasion is defined as: “an abnormal wearing away of a substance or structure by a mechanical process”. Attrition is defined as: “loss of tooth substance or of a restoration as a result of mastication or of occlusal or proximal contact between the teeth”. Erosion is defined as: “progressive loss of hard dental tissues by an acidic chemical process without bacterial action”.

These pathological processes rarely occur in isolation. NCTTL is therefore considered to be multifactorial in nature. As the lost tissues are not replaced, the effects of the disease process are therefore cumulative and irreversible. The UK has an increasingly ageing dentate population, with an average life expectancy of eighty (plus) years. The prevalence of NCTTL has increased considerably in recent years and underlying trends indicate that it will continue to do so; consequently, the cumulative effects of NCTTL will therefore present a considerable restorative management problem in the future.

This is essentially mechanical wear of tooth surfaces by extraneous agents and four types have been identified. Cervical abrasion, also termed “abfraction”, is characterised by a v-shaped groove at the cervical margin of anterior and posterior teeth (Fig 7-1). It is usually more prominent on canines and premolars. There are many views as to the aetiology of this type of lesion, which include: 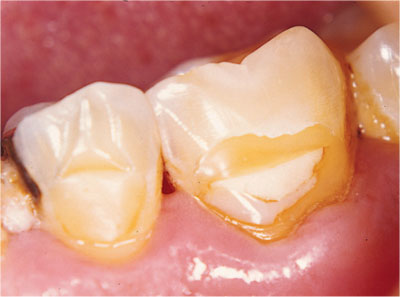 The above theories have largely been superseded by the concept of “abfraction”. This theory suggests that flexure of a tooth during occlusal loading causes micro-fractures in the cervical enamel with subsequent cavitation. Although this is held to be the cause it has never been demonstrated in a scientific study. It also does not explain why teeth which are not in occlusion still develop lesions

Habitual abrasion has a variable clinical presentation, which is dependent on the causative factor. Classic and often-quoted examples include: pipe smoking and hairgrips. Iatrogenic abrasion includes the grinding of opposing teeth to accommodate restorations. Note that unglazed ceramic crowns also cause abrasion of the opposing teeth. Although the newer ceramic systems have similar wear rates to that of enamel, metal occlusal surfaces for posterior indirect porcelain fused to metal restorations are still to be preferred. Historically, industrial abrasion has also been described but is less common owing to better control of industrial environments. It was principally seen in industrial settings where abrasive particles were present in the atmosphere.

The clinical features include (Fig 7-2): 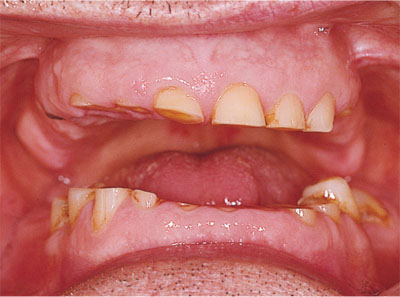 The aetiology of attrition is complex and poorly understood. A parafunctional habit as a result of a difference between the retruded contact position and intercuspal position is probably the commonest cause. Tradition presupposes that the lack of posterior teeth (support) may be responsible for attrition of the anterior teeth. There is no evidence to support this theory and the proprioceptive fibres of the anterior teeth should prevent excessive loading. The nature of the process is so slow that secondary dentine forms and thus sensitivity is not usually part of the clinical picture. Sensitivity precludes attrition as an aetiological factor. However, attrition superimposed on erosion or vice versa could well present with sensitivity.

Two types of attrition have been described. Physiological attrition is defined as gradual and regular loss of tooth substance as a result of “normal” mastication. Attrition confined to local areas or specific groups of teeth, caused by abnormal function, is termed pathological attrition.

The clinical features of erosion depend upon the source of the erosive agent. Extrinsic erosion due to acid present in the diet will on the whole affect the labial surface of the anterior teeth and to a lesser extent the occlusal surfaces of the lower permanent molars (Fig 7-3). Intrinsic erosion due to acid regurgitation (gastric acid) will usually affect the palatal surfaces of the upper teeth and on occasion the occlusal surfaces of the lower permanent molars (Fig 7-4). It would be helpful if the aetiological basis for erosion was so clear cut. Anorexic patients are often dehydrated due to starvation, use of laxatives and diuretics. As a consequence, they consume carbonated drinks and fruit juice to quench their thirst, which in turn produce labial erosion. This can confuse matters further when attempting to identify an aetiological cause. Anxiolytics prescribed for the treatment of anorexia nervosa can produce xerostomia (dry mouth) and can potentiate the erosive process due to reduced salivary buffering. It must be emphasised again that attrition and abrasion can exacerbate the effects of erosion.