In treating patients with developmental disorders, dental practitioners find themselves facing unique challenges that are not common in other patient populations. Because patients with developmental disorders are more reliant upon the system of care that surrounds them, they suffer greater health consequences when that system of care breaks down. In order to decrease the likelihood of health system failure, health professionals from all disciplines need a more holistic view of the patient and of patient care. This can be achieved through greater interdisciplinary understanding and communication. Dentists who have a greater neurobiological understanding of the whole patient will be more effective members and leaders of the health care team upon which their patients rely.

For clinicians first beginning to work with this patient population, one of the most immediate challenges is understanding the terminology used in different professional, advocacy, and legal circles that refers, often imprecisely, to the same (or nearly the same) population. 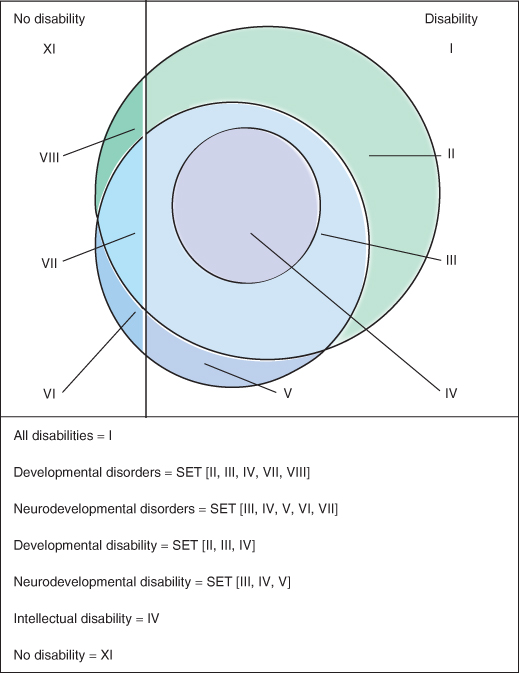 In the United States, there are five widely used terms that often refer to the same population: “intellectual disability,” “neurodevelopmental disability,” “neurodevelopmental disorder,” “developmental disability,” and “developmental disorder.” Though there is significant overlap among these five terms, it is important to appreciate the relationships and the differences among them. Figure 5.1 shows the relationships among these terms. In order to better understand this, consider that the entire population is divided into two segments, those who are disabled and those who are not disabled. Though what factors determine “disability” can often be vague, for purposes of this illustration consider that there are two groups of people and that the difference between these two groups is easily demarcated by a line.

Intellectual disability is characterized by significant limitations in both intellectual functioning and adaptive behavior as expressed in conceptual, social, and practical skills. This disability originates before age 18 (Schalock et al. 2010). It is a common symptom of multiple developmental and neurodevelopmental disorders.

Under federal law, developmental disability means a severe, chronic disability of an individual that (1) is attributable to a mental or physical impairment or combination of mental and physical impairments; (2) is manifested before the age of 22; (3) is likely to continue indefinitely; (4) results in substantial functional limitations in three or more of the following areas of major life activity: self-care, receptive and expressive language, learning, mobility, self-direction, capacity for independent living, economic self-sufficiency; and (5) reflects the individual’s need for services, supports, or other forms of assistance that are of lifelong or extended duration and are individually planned and coordinated (Developmental Disabilities Assistance and Bill of Rights Act of 2000).

In general, regardless of the terminology used to describe this patient population, there are common biological characteristics that will affect patient care. Though people with purely physical disabilities may require special accommodations, it is the patients with neurodevelopmental disorders that tend to present the greatest challenge for the dental practitioner. Understanding the characteristics of these patients and appropriately adjusting the clinical approach to the patient based on these common characteristics will ensure the greatest chance of clinical success.

No matter how the patient presents, it is important to remember that all disabilities have a cause. Very often patients will arrive at the clinic with the “diagnosis” of intellectual disability, with no other explanation. As clinicians it is important to attempt to ascertain the underlying cause of the ID. There are potentially thousands of causes of intellectual disability that exist. Though many causes are still unknown, as the state of science has evolved, more and more causes of ID are being described. Determining etiology is important because etiology can affect prognosis and determine specific preventive health measures that can be taken. Intellectual disability caused by Down syndrome, for example, leads the clinician to a much different clinical picture than ID due to lead toxicity. Knowing the etiology can greatly affect preventive health measures and, just as importantly, can be very powerful information for family members. Such information will not only guide the care of the patient; if it is an inherited disorder it may also have a significant effect on future family planning (Box 5.1).

In order to help discover etiologies, dentists should familiarize themselves with some of the more common morphologic features of the head and neck of the more recognizable syndromes. Though Down syndrome can be recognized by most clinicians, many other syndromes such as fragile X, Prader-Willi, Angelman, Williams, fetal alcohol, Cornelia de Lange, Turner, and Sturge-Weber have distinctive physical features that can be recognized by the dentist. If a dentist suspects that a patient may have a previously undiagnosed syndrome, he or she should not hesitate to refer the patient to a geneticist for further evaluation. Because of the rapidly advancing field of genetics, even if the patient had a negative genetic evaluation in the past, if that evaluation is more than 10 years old, the patient may benefit from another evaluation.

Box 5.1 Family perspective on the value of a diagnosis.
I can say that, for us, it really was helpful to get (our child’s) diagnosis. When preliminary testing did not provide answers, they told us that a diagnosis probably would not affect the treatment approach and they did not see much reason to look further. They diagnosed (our child) with cerebral palsy and mental retardation; we were fairly certain that was not what (our child) had and we decided to look further.
We went to Children’s Memorial in Chicago and . . . they diagnosed (our child) with 22Q13 Deletion (Phelan-McDermid Syndrome). . . .
In addition to our own knowledge and comfort, there have been specific benefits for (our child) receiving a diagnosis. When we were first looking for a diagnosis, (our child) was diagnosed with arachnoid cysts and neurologists had recommended yearly MRIs. Once we had the diagnosis we were instructed not to proceed with future MRIs as the diagnosis explained the brain phenomena. In addition, we were instructed to have a CT of (our child’s) kidneys because problems are frequent in this population. Even learning simple, seemingly inconsequential, things proved helpful. We avoided the use of antifungal medication after learning that these kids just tend to have flaky toenails. . . .
In (our child’s) case, we were able to avoid some costly and emotionally draining tests. I can also say that the diagnosis provided some peace of mind.

Etiology can be divided into two broad categories: genetic and acquired. Genetic causes are present at conception; acquired causes may be prenatal, perinatal, or postnatal in nature. In general, the closer in time an etiology is to conception, the more likely it is that it will affect more organ systems of the developing person and that those effects will produce a physically recognizable syndrome. Practically, this means that if an etiology has not yet been determined for an individual, a person who appears to have more body systems affected by the disorder is more likely to have an underlying genetic cause rather than an acquired cause.

Though no estimates exist regarding the percentage of people with neurodevelopmental disorders having any of these particular complications, in the presence of ID, the likelihood of any one of the other four complications also being present is around 25% (Holder et al. 2007) (see Table 5.1).