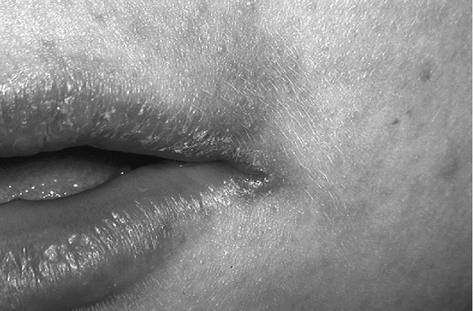 Fig. 7.1
Angular cheilitis: vertical fissuring of lips as a consequence of B-vitamin deficiency

Noma (also known as cancrum oris) is a gangrenous lesion of early childhood in which the perioral flesh is destroyed. The disease is exclusive to malnourished and poor communities and occurs most commonly in Africa, where the prevalence is 1–7 per 1,000 population. Cases of noma have also been reported in Asian and Pacific countries [60].
Details of the pathogenesis have been reported elsewhere [61]. In brief, compromised nutritional status and/or viral or other infections result in impaired immune function. Next, oral ulcers appear, such as acute ulcerative gingivitis, and these are exacerbated by malnutrition and/or viral infections. The ulcerated tissue provides a site of entry for organisms, including Fusobacterium necrophorum and Prevotella intermedia that cause the gangrenous lesion [62]. Undernutrition is a key factor in the rapid progression of necrotising ulcerative gingivitis to noma. Mortality from noma is very high (70–90%) [63]; effects are severe esthetic and functional lesions. The prevention of this disfiguring disease relies on prevention of malnutrition in poor countries.

Cancers of the mouth and pharynx are the seventh most commonly occurring cancers worldwide and the seventh most common cause of death from cancer. Survival rates average around 50% at 5 years [64]. The epidemiology and prevention strategies for cancers of the head and neck are addressed in Chapters 12 and 3 nutritional management of individuals with head and neck cancer are covered in of this book. There has been much research regarding the associations between diet and oropharyngeal cancers, including individual micronutrients, food types, and dietary supplementation; it is estimated that up to half of oral cancer could be prevented by dietary and associated factors [64].

Periodontal diseases include a group of chronic inflammatory diseases that affect the supporting tissues of the periodontium, including the bone, gingival tissue, and the periodontal ligament. Periodontal diseases are routinely divided into two forms: gingivitis and periodontitis. Gingivitis, usually reversible, is an inflammation of the soft tissue without apical migration of the junctional epithelium. Gingivitis is observed from adolescence through adulthood. Periodontitis presents as a persistent immunoinflammatory response to a complex biofilm that colonize the subgingival niche of the gingival tissues. The most common forms of periodontal disease is found among adults and increases with age; however, periodontitis can also be found in younger individuals [65, 66].
Although convincing scientific evidence supports the fact that the pathogenesis of periodontitis involves infection with Gram-negative, anaerobic oral bacteria and that tissue damage occurs as a result of the complex interaction between pathogenic bacteria and the host’s response to infection, several local and systemic factors are known to be associated with the risk or the severity of the periodontal disease [67, 68]. Nutrition is known to be important for maintaining periodontal health, and several dietary aspects may contribute to the disease process. Results of the Health 2000 Survey in Finland demonstrated that both the extent and severity of periodontal disease is associated with obesity [69].
Two potential mechanisms that describe the relationship between diet and periodontal disease have been proposed. The first mechanism is the role that diet plays in the formation of the nutrient rich biofilm. The second mechanism proposes that nutritional deficiencies impact the health of the periodontal tissues. Research into the local effect of diet on plaque has focused largely on the effect of an abrasive diet in reducing plaque formation. Although animal studies demonstrated a relationship between diet and plaque formation [70, 71], the significance to humans is questionable because of differences in tooth morphology. It is also unclear whether, in addition to the influence of diet on amount of plaque present, this relationship extends further to influence the development of gingivitis and periodontitis. A more important influence of diet on periodontal health is the relationship between suboptimal dietary intake and nutritional status, and periodontal disease. Studies discussed in the following sections suggest an association between undernutrition and periodontal disease and the role of specific nutrients such as vitamin C, calcium, vitamin D, antioxidants, and dietary fats in periodontal disease.

PEM has been linked to periodontal disease. Enwonwu has outlined several mechanism to explain this link including: (1) decreased resistance of mucosa to colonization and invasion by pathogens; (2) impaired salivary flow and antibacterial properties; (3) reduced acute phase protein response in malnutrition; and (4) an increase in the prevalence and potency of pathogenic oral microorganism in PEM [72].

Vitamin C (ascorbic acid) is one of the most well-documented nutrients associated with periodontal health. Severe vitamin C deficiency is known to lead to scorbutic gingivitis (scurvy), characterized by ulcerative gingivitis and rapid periodontal pocket development with tooth exfoliation [73]. Vitamin C promotes a collagen formation and reduces the permeability of endotoxin from the oral mucosa [74]. Studies show that vitamin C enhances motility of polymorphonuclear leukocytes, and increases host immune responses [75, 76]. A reduction in bleeding on probing after supplementation with vitamin C was noted, suggesting that vitamin C may influence early stages of gingival inflammation [77]. Vitamin C may improve periodontal health by increasing bactericidal activity against Actinomyces viscosus [78].
Studies in animals have shown that a diet deficient in vitamin C increases susceptibility of the periodontium to chronic inflammation [79], and acute vitamin C deficiency increases the permeability of the gingival sulcular epithelium. The periodontal effects of vitamin C deficiency in humans are inconclusive. While some epidemiological and experimental evidence has failed to demonstrate significant etiological relationship between vitamin C deficiency and periodontal disease [80, 81], others have reported a direct relationship between gingival inflammation and vitamin C status [79, 82]. In healthy nonsmoking men aged 19–28 years, it was found that vitamin C deficiency contributed to the early stages of inflammation. This finding was noted even when controlling for changes in plaque accumulation or probing depths [77]. Leggott et al. [82] found a significant increase in gingival bleeding after a period with vitamin C depletion, without significant changes in plaque accumulation, probing pocket depth, or when attachment level were observed. Studies that examine vitamin C and its effect on the extracellular matrix and immunologic and inflammatory responses provide a rationale for hypothesizing that vitamin C is a risk factor for periodontal disease.
The role of dietary vitamin C as a contributing risk factor for periodontal disease has been investigated using data from the Third National Health and Nutrition Examination Survey (NHANES III) [73]. The periodontal health of 12,419 adult smokers and nonsmokers ages 20 or older was correlated to their dietary vitamin C intake. The dietary intake of vitamin C showed a statistically significant relationship to periodontal disease in current and former smokers as measured by clinical attachment. Those persons with the lowest intake of vitamin C, and who also smoke, are more likely to experience more severe periodontal disease, indicating a dose–response relationship.
A relationship between vitamin C and wound healing has been documented. In healthy young adult males, classified according to periodontal status, one single intravenous dose of 500 mg of ascorbic acid resulted in statistically significant correlations between gingival status and ascorbic acid concentrations in whole blood and urine [83]. In contrast, Woolfe et al. [84], found that an intake of 1 g vitamin C per day for 6 weeks in normal human subjects did not have an effect on the gingival response to initial therapy, and identical gingival responses to periodontal therapy were found in control and vitamin C—supplemented patients. Final blood vitamin C concentrations appeared to have increased minimally, suggesting that excesses of the vitamin were excreted in the urine. These data suggest that there is little to no value for OHCPs to recommend vitamin C supplementation for periodontal patients when the dietary reference intake (DRI) can be easily met through consumption of a healthy, balanced diet. (See Appendix for U.S. DRI reference).

Dietary calcium deficiency has been associated with changes in collagen synthesis and structure in oral connective tissue, and therefore thought to be a potential modulator for periodontal health [85]. Both animal and human studies suggest a relationship between calcium intake, bone mineral density (BMD), tooth loss [86], and resorption of the alveolar bone [85, 87, 88]; however, this relationship is not clearly elucidated.
In a double-blind study, calcium supplementation (1 g) for 180 d without any subsequent periodontal treatment did not influence the periodontal status of patients with moderate to advanced periodontal disease [89]. The periodontal status of patients with a low-calcium intake did not differ from those receiving adequate calcium. Other studies have reported positive associations between calcium supplementation and periodontal conditions [90, 91]. Periodontal disease has, in humans, been found to be reversed when the patients were given 1 g calcium per day for 180 d [91]. In a study of more than 12,000 adults, Nishida et al. [86] found a statistically significant association between lower dietary calcium intake and periodontal disease in young males and females and for older males. For the females with the lowest level of dietary calcium intake, there was a 54% greater risk of periodontal disease. See Chapter 16, Osteoporosis, for additional information on the role of Calcium and other nutrients in bone health.

Dietary omega-3 fatty acids, docosahexaenoic acid (DHA), and eicosapentaenoic acid (EPA) have anti-inflammatory actions that may benefit periodontal health. These long chain fatty acids are found in oily fish and also nuts and seeds, e.g., flaxseed. Though animal studies of the effect of omega 3 fatty acids on the periodontal tissue have shown mixed results, studies in humans are more convincing. Chapple [92] reviewed the literature and noted that shifts in nutritional status are independently associated with periodontal disease. The composition of fatty acids in inflamed gingival tissues is significantly different from that in healthy tissues [93]. Serum concentrations of omega 3 fatty acids have been shown to be lower in patients with alveolar bone loss compared with periodontally healthy subjects [94]. Furthermore, in a cohort study of older Japanese men, a lower intake of omega 3 fatty acids was significantly associated with greater development of periodontitis compared with a higher intake of omega 3 fatty acids. Those in the lowest cohort of DHA intake were at 1.5 times the risk than those in the highest tertile of intake after adjusting for confounders such as smoking, age, and body mass [95]. In the same cohort study, a high intake of saturated fatty acids was also significantly associated with a greater risk of periodontitis in nonsmokers [96]. Naqvi [97] compared periodontal status to the intake of omega-3 fatty acids in a cohort of 9,182 adults participating in NHANES from 1999–2004. He found that a higher dietary intake of DHA and EPA were associated with a lower prevalence of periodontal disease; however, the link with DHA was stronger than that for EPA in this study. These finding support other work that notes that oxidative stress is modulated by diet and infection, which has an impact on the extent and severity of periodontal disease.

Antioxidants, present in all body fluids and tissues, may protect against tissue-destructive effects of reactive oxygen species. In the periodontal environment, these oxygen species can lead to lipid peroxidation, protein degradation, DNA mutation, and bone resorption [98]. Examples of dietary antioxidants include, ascorbic acid (vitamin C), α-tocopherol (vitamin E), and β-carotene and other polyphenolic dietary components as well as uric acid, nonprotein thiols, and glutathione [99]. In periodontal disease, it has been found that P. gingivalis triggers the release of cytokines, resulting in increased activity of polymorphonucleocytes (PMN) and that increased oxidative damage to gingival tissue, periodontal ligament, and alveolar bone may occur [100]. A similar increase in PMN cells has been found after only 3 d plaque accumulation during experimental gingivitis [101].
Reduced salivary antioxidant activity in patients suffering from periodontal disease has been reported to result in reduced concentrations of antioxidants in both saliva [100] and gingival crevicular fluid [102, 103]. Iwasaki found that [104
Only gold members can continue reading. Log In or Register to continue