Orthodontic treatment is often part of a multi-disciplinary team approach for dental patients.

These patients fall into three main categories of combined need:

Some patients, for example patients with a cleft condition, may require treatment from all three categories.

These patients sometimes have conical or ‘spiky’ teeth. The most common tooth affected is the upper lateral incisor. These teeth are sometimes referred to as peg-shaped. These irregularly shaped teeth have to be built up either with facings, veneers or crowns. Sometimes, several teeth are affected.

These patients do not have all the teeth needed to make up the full dentition. They rarely have both the deciduous (baby) and permanent tooth missing. If this is just a single tooth, it may be possible to close the space orthodontically. If the span is too wide, then it is necessary to have some type of replacement.

Some patients with hypodontia have several missing teeth, even three or more per quadrant. Sometimes, hypodontia and microdontia are found in the same patient. Orthodontic treatment can be invaluable in correcting the existing permanent teeth into position to facilitate the restoration of spaces left by the absence of a number of teeth.

Some patients are born with:

These may require corrective jaw surgery.

It may also be necessary to have surgery on:

A frequent interface between the orthodontist and the maxillo-facial surgical team comes when the patient requires an osteotomy. This is a procedure to correct a skeletal discrepancy of mandible/maxilla. Patients are seen on a combined clinic. At these clinics, the patients are also given information leaflets (Figure 20.1).

Most osteotomies are carried out inside the mouth. Sometimes, bone is harvested from another site, often from the hip (the iliac crest) for use in the procedure.

These are carried out after the patient has finished most of their growth. In the case of the face, this is later for boys than girls.

Figure 20.1 Leaflet for orthognathic surgery. (Reproduced with the kind permission of the British Orthodontic Society.)

The maxillary (mid face) osteotomies include:

The mandibular (lower face) osteotomies include:

For many patients, these operations will alter their appearance. This is one of the reasons the patient may be offered an appointment with a clinical psychologist at this stage. 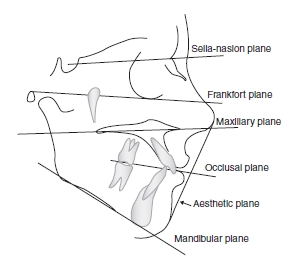 For these patients, the orthodontist and maxillo-facial surgeon need to see patients together to formulate a treatment plan.

As part of this, the orthodontist will take radiographs, including a lateral and, occasionally, a postero-anterior (PA) cephalogram on which to reproduce a tracing.

There are many reference points on a tracing.

Skeletal measurements can be recorded:

For the purposes of a basic guide, it would be useful as a baseline to see the:

Tracing can be done either:

In order to make a manual tracing, the operator will need:

When using the manual method the clinician will:

NB: Soft tissue profiles are not so predictable but as a guide, follow the bone changes by 50%.

When using a computer, the operator needs to trace the reference points which are plotted by the software program. This calculates the angles and measurements, which, when printed out are shown together with line tracings.

In addition, the laboratory technician:

Orthodontic treatment will then be planned and carried out/>