To summarise the risk factors thought to be associated with dental erosion.

After reading this chapter the practitioner should have an understanding of:

Exposure of the teeth to acid increases the risk of dental erosion developing. The source of the acid may be either intrinsic (from within the body) or extrinsic (from outwith the body). Extrinsic factors are wide-ranging and include dietary, environmental, medicaments’ and lifestyle agents. Figure 2-1 summarises the main risk factors. 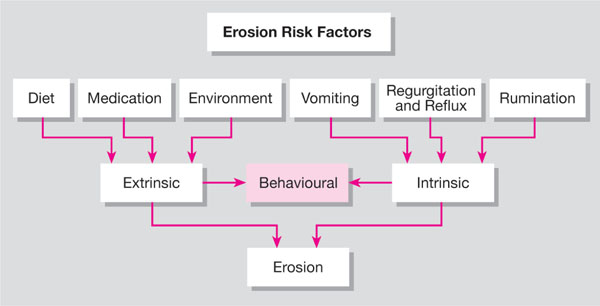 Any condition or behaviour that results in acid from the gastrointestinal tract coming into contact with the teeth constitutes an intrinsic factor or a breakdown in the protective effects of saliva.

Gastric contents may reach the oral cavity in a variety of ways:

Vomiting and its variants play a significant role in a variety of eating disorders.

These may be defined as a persistent disturbance of eating behaviour or behaviour intended to control weight that significantly impairs physical health or psychosocial functioning and is not secondary to a general medical condition or another psychiatric disorder. In modern western society it is believed such disorders are on the increase. Four principal types are described currently:

Anorexia nervosa (AN) – although commonly believed to be a disease of the modern age, was first described independently in literature published during the 1870s by the Englishman Sir William Gull and Frenchman Ernest-Charles Lasegue. The term is derived from the greek orexis, meaning a nervous loss of appetite. It manifests as an aversion to food resulting from a complex interaction between biological, social, individual and family factors, leading to severe weight loss. Its prevalence is of the order of 0.1–1% of young females, with the average age of presentation being 16 years old. Incidence (the number of new cases in the population over one year) is estimated to be seven per 100,000. In general, affected individuals look thin and are more than 15% below ideal body weight. Two subtypes of this condition have been identified: restricting – where weight loss is accomplished primarily by either fasting or excessive exercise, or binge/purge – where loss of weight is achieved with self-induced vomiting or excessive exercise or by the misuse of laxatives, diuretics or enemas. Sufferers display a fear of gaining weight or becoming fat and have disturbed perceptions of their own body shape and size. With an obsession of self-image, there is a relentless pursuit of thinness. This is accompanied by amenorrhea and psychological disturbances.

The duration of the condition is up to six years. Significant mortality (4–20%) is associated with anorexia nervosa, given its medical complications and predisposition to suicide. The level of suicide risk is lower than with bulimia nervosa. Interestingly, a previous history of anorexia nervosa is considered to be a risk factor for the development of bulimia in later life.

Bulimia nervosa (BN) – the term is derived from the Greek bous (head of cattle) and limos (hunger) meaning literally appetite of an ox. It manifests as recurrent episodes of binge eating followed by inappropriate behaviours, such as self-induced vomiting or excessive exercise to avoid weight gain. It is a more common condition than anorexia, with a prevalence of 1–2% for adolescent girls and 0.1% for young men. Its incidence is of the order of eight to 14 cases per 100,000. The average age of presentation is 25 years. Affected individuals are less readily identifiable from their outward appearance, compared to those with anorexia nervosa, being within 10% of their physiological ideal weight. They may even be slightly overweight. Dentists may therefore be the first health professionals to detect this condition by picking up/>