LEARNING OUTCOMES
By the end of this chapter you should be able to:
1. Explain the causes and development of plaque, and plaque control.
2. Distinguish between aerobic and anaerobic bacteria and their effects on oral tissues.
3. List the secondary factors in the development of plaque.
4. Explain the causes and effects of calculus and tooth staining, and their treatment.

Oral health educators (OHEs) need an understanding of plaque and calculus, and their roles in the development of common dental diseases, such as caries, gingivitis and periodontitis. The OHE should also be able to distinguish between intrinsic and extrinsic staining and advise the patient on teeth whitening.

Most people have heard of plaque, but few would be able to explain its composition.

Plaque is a soft, non-calcified adherent film that collects on the surfaces of teeth (Figure 2.1a): 70% of which is made up of microorganisms (bacteria, fungi, viruses) and 30% of a matrix (the framework that holds it together). 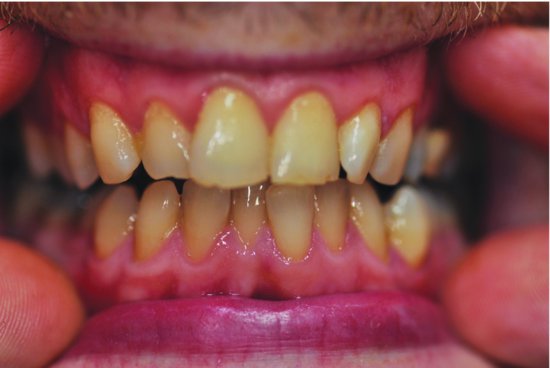 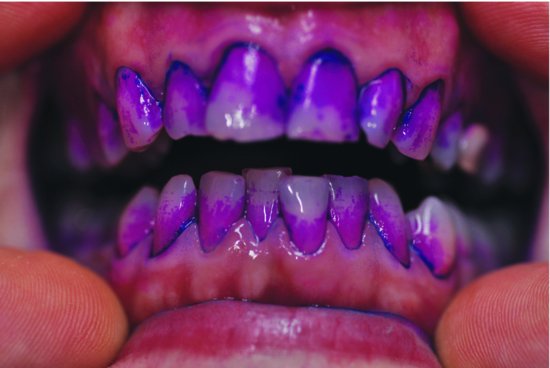 Plaque is found in all mouths and makes up part of the natural flora of the body. The most common sites where plaque is found are occlusal pits and fissures, cervical margins of the teeth and in periodontal pockets. Patients can be made aware of plaque in their mouths by using a disclosing solution or tablets (Figure 2.1b). (See also Chapter 19.)

Plaque is a major causative factor in gingival and periodontal disease and a contributory factor in dental caries. Even in people with good toothbrushing skills, one would need to brush and floss approximately every 3 minutes in order to prevent plaque from forming.

In a healthy mouth, there is a natural balance of bacteria, but when illness or antibiotics (for example) upset the balance of the mouth’s flora, or when teeth are not cleaned often and/or appropriately, plaque matures. Waste products from the bacteria, enzymes and toxins then cause an inflammatory response in the gingival tissues leading to gingivitis (Figure 2.2). Depending on an individual’s response, gingivitis can progress to periodontal disease. 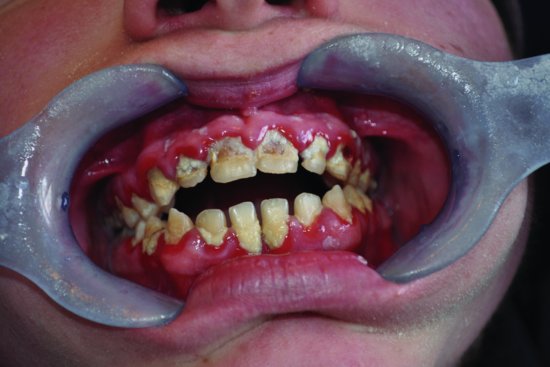 In recent years, dental plaque has been recognised as a biofilm. The concept of a biofilm is of huge importance not only to dentistry, but also to the wider medical world and many sectors of industry. Since the 1990s, there has been a huge amount of research into biofilms, which reflects our growing understanding of their importance.

A biofilm, in simple terms, is a thin layer of bacteria that adheres to a surface. Over 95% of bacteria in nature exist in a biofilm state as opposed to living independently. Contact lenses, rocks in rivers and aspirator tubing in the dental surgery are all examples of surfaces colonised by biofilms.

Within a biofilm, bacteria are not just sitting alongside one another passively; they are communicating, interacting and gaining benefits from one another – acting as a team. This is what makes a biofilm so virulent, resilient and difficult to manage.

Bacteria are the most common microorganisms found in the plaque biofilm and can be classified into groups in a number of ways, including whether they need oxygen (aerobic) or not (anaerobic) to survive.

The majority of bacteria in a healthy mouth come from the oxygen-dependent (aerobic) streptococci genus, which colonise areas of the mouth where oxygen is readily available. When resistance is lowered, they can give rise to sore throats and other illnesses, but are less harmful than their non-oxygen-dependent (anaerobic) relatives.

Aerobic bacteria in the mouth can also be classified as being gram positive, that is, they turn blue when exposed to a dye called Gram’s stain in the laboratory.

The most common species of streptococci bacteria found in the oral cavity are:

Aerobic bacteria feed on sucrose from the human diet, and in doing so, produce sticky substances that enable other more harmful organisms to attach themselves, causing plaque to become more dense and harmful to tissues.

Anaerobic bacteria are a more pathogenic (disease causing) bacteria that produce enzymes and toxins, do not need oxygen to survive, and turn red when exposed to Gram’s stain. They can be found in deeper layers of plaque and in areas of the mouth, such as periodontal pockets, which render them difficult to remove. Examples of anaerobic bacteria are: