17: Numerical and Graphical Information Concerning Development of the Dentition

Numerical and Graphical Information Concerning Development of the Dentition

—formation and emergence of teeth

—occurrence of agenesis of teeth

In most instances, the type and the size of the material on which the investigation is based are incorporated in the tables. Occasionally, this information is supplied additionally.

The numerical and graphical information supplied here about different aspects of the development of the dentition forms a selection from a vast amount of data available in the literature. The selection was based mainly on the criterion of providing information that could support different aspects treated in the text. Another purpose was to present in a compact and easily retrievable way some data for which there is no sense in committing.

The data on transverse dental arch dimensions (Tables 17-9 through 17-12) and times of emergence of permanent teeth (Table 17-4) are based on material of the Nymegen Growth Study.81 A total of 486 boys and girls participated in this study and were followed longitudinally during a 5-year period. The ages were chosen to arrive at overlapping cohorts: from 4 to 9, from 7 to 12, and from 9 to 14 years of age. Every half year, the children were observed and data and material such as impressions of the dental arches were collected. The sample was representative for the population of Nymegen and included 25% Class II malocclusions. Because a large part of the sample exhibited orthodontic abnormalities, the data presented here are limited to transverse width dimensions. For more detailed information derived from the Nymegen Growth Study, and particularly regarding the transition of the anterior and posterior teeth, refer to the literature.4–6, 81, 104, 105, 110, 112–114 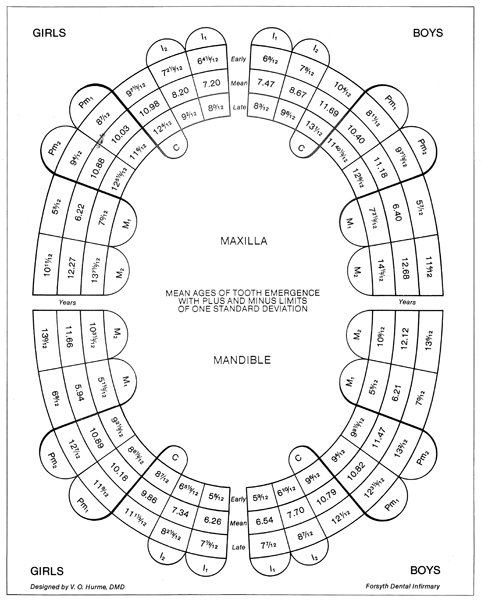 Fig. 17-1 Graphic illustration of early, mean, and late eruption ages for girls (left) and boys (right). Such an age range as depicted would include two-thirds of any sample. (Derived from Hurme, V.O. Ranges of normalcy in the eruption of permanent teeth. J. Dent. Child. 16(1949):11).

The data regarding certain changes in the intercanine distance (Tables 17-13 and 17-14), molar occlusion (Table 17-15), and overjet and overbite (Tables 17-16 and 17-17) are based on material from the University School Growth Study of The University of Michigan.72 In this sample, few and only mild malocclusions are included. Furthermore, these data are not only analyzed on a chronological scale, but also on the basis of biological developmental criteria. An advantage of the latter approach is that derivative values can be plotted against time scales based on certain characteristics of the development of the dentition. This approach has been introduced by Moorrees64 in the study of the development of the dentition. Some illustrations incorporated in this chapter (Figures 17-6 through 17-9) are derived from his classic work: The Dentition of the Growing Child.63 These illustrations clearly demonstrate the large variation in the changes of the intercanine distances. Not all dental arches become wider at the canine region during the transition of the incisors. This observation is in accordance with the large variations that exists in the spatial conditions of the dental arches. The material on which the figures of Moorrees are based also contain, few and only mild malocclusions. 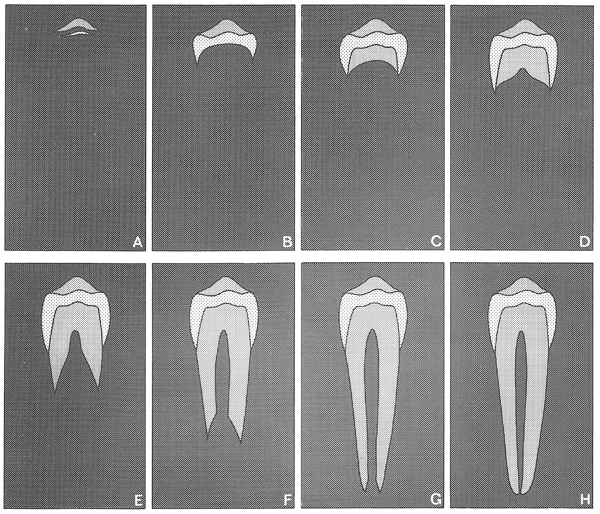 Fig. 17-2 Eight stages of tooth formation of the mandibular first premolar distinguished according to Demerjian et al. 1973.28 (Figure from Prahl-Andersen, B., and van der Linden, F.P.G.M.82)

Fig. 17-5 Estimation of the formation stages of the mandibular permanent teeth, presented on a time scale. For the stages of formation, see Figures 17-2 and 17-3. (Derived from Prahl-Andersen, B., and van der Linden, F.P.G.M.82).*

*The numbers of individuals studied ranged from 121 to 153, except for correlations involving the second permanent second molars (n = 68–72).

Derived from Moorrees, C.F.A., and Chadha, J.M. Crown diameters of corresponding tooth groups in the deciduous and permanent dentition. J.Dent.Res. 41(1962):466.