Waxes have a wide variety of types of application in dentistry, ranging from taking impressions, making patterns for lost-wax casting and acrylic denture baseplates, for bite detection, blocking out undercuts on models, the masking of regions to be protected in electroplating, and the temporary cementing of models. Even given this range of applications, the selection of waxes to do all of these jobs is of course coincidental, essentially relying on just one or a few of the characteristic properties of this class of materials.

Waxes are not defined chemically but rather they take their name in allusion to beeswax, which in view of the presumed antiquity of its knowledge may fairly be called the archetype of all waxes. Beeswax is largely a collection of long chain esters, and it will be shown that this chemistry is associated with a kind of structure that leads to the same general properties arising both in a range of pure substances as well as their mixtures.

The simplest waxes are the alkanes (CnH2n+2), whether straight chain or branched, and these paraffins may be considered as waxes when they are solid at room temperature or thereabouts. Thus, for n = 17, the melting point is about 22 °C. There is no effective upper limit to n. Polyethylene, named more from its manufacturing route than what for it is, an alkane, may also be considered as a wax, where n is then counted in the thousands or tens of thousands. Indeed, it may be used in some dental products. However, a typical practical limit to dental usefulness for alkanes is with n ~ 60.

The alkanols (CnH2n+1OH) and alkanoic acids (CnH2n+1COOH) are also waxes if n is large enough, but in fact they are not very common as constituents of the natural products employed in dental wax manufacture. On the other hand, esters are very common (see beeswax, above), especially as plant products. In the general formula for saturated esters, CnH2n+1.COO.CmH2m+1, m and n may both be in the range 15 – 30. Similar length chains are found in the unsaturated esters, and in all similar compounds that exhibit beeswax-like properties, i.e. are waxy.

The melting point of the straight chain alkanes is dependent on the number of carbon atoms (Fig. 1.1) as might be expected, but there is a subtle effect associated with whether the number of carbon atoms in the chain is odd or even. This is most noticeable in the lower members of the series, the odd-numbered chain having a slightly lower melting point than expected (or vice versa), and this illustrates the subtlety of the factors involved in the crystallization of such compounds. Similarly, branches in the chain can have dramatic effects. For example, for the series n = 4 to 10 (at least), the addition of a methyl group in the 2-position lowers the melting point by 18 – 24 °C, despite the increase in molecular weight (Fig. 1.1). The position at which the substituent has been introduced is also extremely important (Table 1.1), but largely unpredictable. Clearly, it is difficult to arrange such molecules in regular arrays, and crystallization becomes more difficult; thus the melting point is lowered. 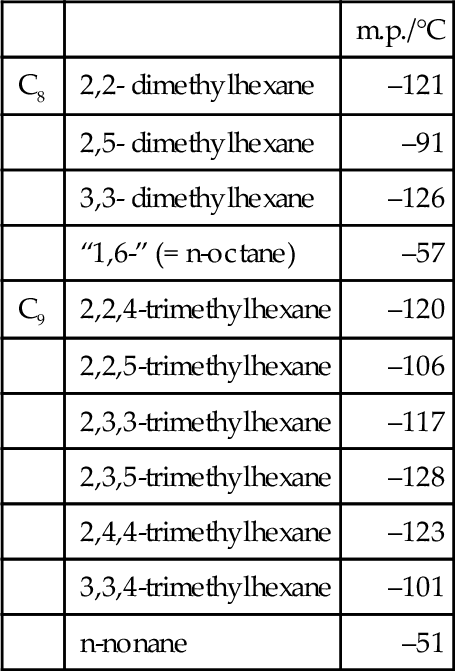 Natural waxes are likely to consist of a mixture of a great many compounds: mixtures of types (alcohols, esters, etc.) and mixtures of straight and branched chains, all of which will have different physical and mechanical properties. Although one or a few compounds may dominate, they never approach purity. Even in refined paraffin waxes derived (by distillation) from petroleum, there will be a range of sizes present, probably concentrated around some central value, but with tails in both directions. Under these circumstances it is not surprising to find that there is no single, sharp melting point for any of these natural products, but rather there is a pronounced melting range. A mixture of two metals has already been discussed in the context of the phase diagram and cooling curve, and mixtures of two chemically different waxes (which are themselves mixtures) can be studied in a similar manner. Generally the mixture has a wider melting range than either component wax (Fig. 1.2).[1] But when the mixture consists of many compounds, with strong chemical similarities, it may become impossible to obtain precise values for the top and bottom of the melting range merely by studying ordinary cooling curves (Fig. 1.3) (see 11§2.7). In these cases, microscopic observation of a few shavings on a heating stage may be necessary to detect changes in appearance, but with an appropriate technique it is possible to demonstrate not only the onset and completion of cooling but also the presence of many other features that may then be related to mechanical properties (Fig. 1.4).[2]

Waxes can be described as being weak solids, having low yield points at moderate rates of strain, with a tendency to creep even under low stresses, low melting points, and as being hydrophobic (i.e. showing poor wetting by water). It is not difficult to account for these properties.

First of all, being non-polar or nearly so (paraffinic chains dominating), intermolecular forces are almost entirely of the van der Waals type and so very weak (10§3). This means that strength is low, and yield point much lower. It also fixes the low melting point, essentially because it does not require much energy to separate or slide such molecules over each other. Furthermore, it immediately accounts for the poor wetting as there are few or no groups to interact with the water.

Secondly, the chain lengths are rather too long to permit good crystallization, faults in alignment are easy, yet they are not long enough to allow entanglements as in high polymers (3§3). In addition, it is essentially impossible to accommodate the carboxyl group in esters in a regular array (Fig. 1.5). We might note that for a typical ester, with moderately long chains for the acid and alcohol, reversing the molecule (end to end), would not change the appearance of the structure, the two would be quite similar except perhaps for the position of the ester linkage. If it could be incorporated in a crystal structure at all, orientation would not matter very much energetically, but it would add to the irregularity of the crystal. Add to this the fact that most waxes are mixtures of very similar molecules, homologues differing by one or two carbon atoms or maybe by having an unsaturated carbon-carbon bond, and the strength-related properties are even more compromised. However, the chain lengths are great enough that some high polymer-like properties are observed. Glass transition temperatures (3§4) can be identified, with clearly brittle behaviour below and plastic behaviour above. There is therefore the expectation of strain-rate sensitivity, hence there is creep at low stresses. In amorphous regions, as in polymers, plasticizer effects will be observed if smaller molecules are present.

The dissimilarities of the constituent molecules are great enough that continuous solid solutions, as are found in metal alloys (11§3.7), are probably never formed. Rather, the microstructure of a wax is typically multiphase. Primarily, there will be a mixture of very small crystals of the nearly pure individual components which will have separated from the cooling melt. These will be distributed in an amorphous matrix of everything else that was left over, whether by not having enough time to crystallize out on existing crystals, or by being uncrystallizable. The relative amounts of matrix and crystalline core thus depends on the thermal history. Over time, solid waxes change their properties (both mechanical and optical) as solid-state diffusion permits further crystallization, the rate depending on temperature – we observe ageing. Here again we may notice that the working temperatures, say 20 – 40 °C, are very close to the melting temperatures, T/Tm being as much as 0.95. Thus, strength is necessarily low and diffusion rates high (allowing for the fact that the molecules are typically fairly large). The ageing process can be observed optically because the translucency increases as the proportion of amorphous material between crystals decreases (3§4.1).

The picture is potentially more complicated than this. Since there is a solidification range as an obvious consequence of there being a melting range (Figs 1.2, 1.4), over a large temperature range there will be liquid present even if the mass appears to be solid. Such liquid, even in small amounts, could have profound effects on the mechanical properties by acting as a zero-strength dispersion or even as a continuous three-dimensional network which will allow and lubricate relative movement of crystallites. In other words, it is paste of weak solid in liquid. This is consistent with what one observes of wax handling properties. Such liquid provides a path of easy diffusion and so suggests that ageing effects may be quite rapid. Further, there is no guarantee that all fractions of the wax will solidify at any ‘normal’ working temperature, say down to 18 °C (see Fig. 1.1). Purification of such mixtures is difficult and expensive, and hardly worth the trouble for such non-critical substances. As an illustration of this, consider the odour of ‘pure’ waxes (low molecular weight volatiles), the slow ‘bleeding’ of wax into plain paper to leave an oily mark, the fact that some waxes may show a ‘bloom’1 of crystalline material that results from migration to the surface on long standing, similarly some even show clear traces of liquid. Couple this with the general lowering of melting points in mixtures and it becomes more than likely that traces of liquid are important determinants of wax properties.

From the above, waxes (where the fact that these are mixtures is taken as read) may be formulated to exhibit a wide range of properties such as melting range. But in order to achieve a more practically useful suite of properties for dental applications other additives must be used. For example, many waxes are not very tough, and flake or crumble when cut, more or less exhibiting brittle behaviour on a small scale due to high rates of strain. This would leave a carved surface rough and difficult to smooth. On that basis, slow carving of small slivers at a time will give a better result than attempts to remove large portions quickly. Plasticity is also important, for shaping a pattern without cracking. Other substances are therefore included. To the list of natural and synthetic waxes which are potential ingredients may be added carbohydrate gums, oils (i.e