Filling the instrumented root canal is the final step in the completion of an endodontic treatment. Regardless of whether the treatment was undertaken to remove a vital pulp (pulpectomy), a necrotic and/or infected pulp (root canal therapy) or a previous root canal filling (retreatment), the prime objective of the root filling is to prevent microbial organisms from entering, growing and multiplying in the empty space that resulted from the instrumentation procedure (Fig. 13.1). Root filling also serves as a wound dressing against which healthy periapical tissue can be laid down.

After pulpectomy a wound surface remains that will not heal with epithelium as wounds do in other body sites. Such a wound surface is therefore constantly vulnerable to infection. Wound infection may be induced inadvertently in conjunction with the treatment procedure, e.g. from improper rubber dam isolation or by bringing chips of carious dentin to the apical region of the root canal. It may also develop from entry of bacterial organisms from the oral environment after completion of the filling. The latter is known as coronal leakage and occurs along incompletely sealed canal spaces. Therefore, a hermetic and permanent seal of the wound surface is essential to allow proper healing after pulpectomy and to prevent bacterial elements from later accessing the periapical tissue if, for any reason, the coronal restoration breaks down. Core concept 13.1 summarizes the overall functions of a root filling. 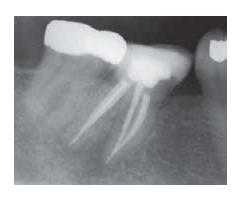 In the treatment of a tooth with an infected, non-vital pulp (i.e. root canal therapy), instrumentation and irrigation with a disinfecting solution will not always eliminate the microbial organisms. If such a root canal is left unfilled or improperly filled, residual organisms may continue to grow and multiply (Chapter 9). It needs to be recognized that microbial organisms require both space and nutrition for growth, therefore in root canal therapy the root filling has two additional objectives:

1.   To prevent nutritional elements from accessing the pulpal space along any entrance to the root canal, including apical foramina, accessory canals and the oral access cavity.
2.   To eliminate space for further growth of microorganisms that may have survived the biomechanical preparation.

Usually it is sufficient to block the portal of exit to the periapical tissue. However, lateral or accessory canals may also allow egress of bacterial elements to the periodontium. Therefore it is essential that the entire length of the instrumented canal becomes completely filled. If properly done this means that all portals of exit to the periodontal tissue will be sealed. The quality of root fillings in general is assessed from this aspect (see further below).

A variety of factors determines the choice of a root canal filling material. Although a primary requirement is to allow a complete fill of the instrumented root canal(s), it should also be biologically compatible because it will often be in direct contact with vital tissue. In other words, beside a variety of technical and physical demands, a root filling material should also satisfy the requirements that are requested from implant materials (Chapter 12). The most critical technical and physical requirements of a root filling material are: 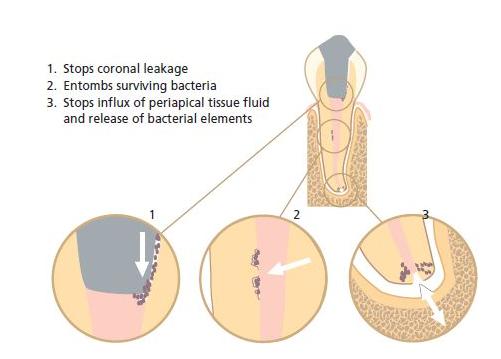 Hardly any root filling material so far developed has been able to satisfy all these demands. Yet a formulation based on gutta-percha as one of the principal ingredients has stood the test of time and has been widely used since the end of the 19th century. Although new core materials are under exploration it is still the material of choice in most countries. By pressure or by softening with heat or organic solvent, gutta-percha is suitable for application in instrumented root canals using a variety of techniques (see further below). Combined with a sealing agent, the material can be adapted to the shape of root canals and serve as a reasonably insoluble and non-porous core of filling. At the same time, it is fairly easy to remove if necessary. Gutta-percha-based formulations also satisfy biological demands (Chapter 12). Because of the universal use of gutta-percha in endodontics, techniques that are based on this material will mainly be considered in this chapter.

Fig. 13.2 Outline of techniques to fill root canals with gutta-percha. 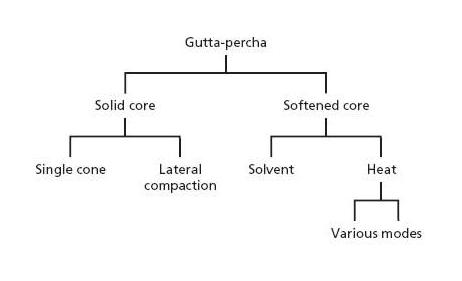 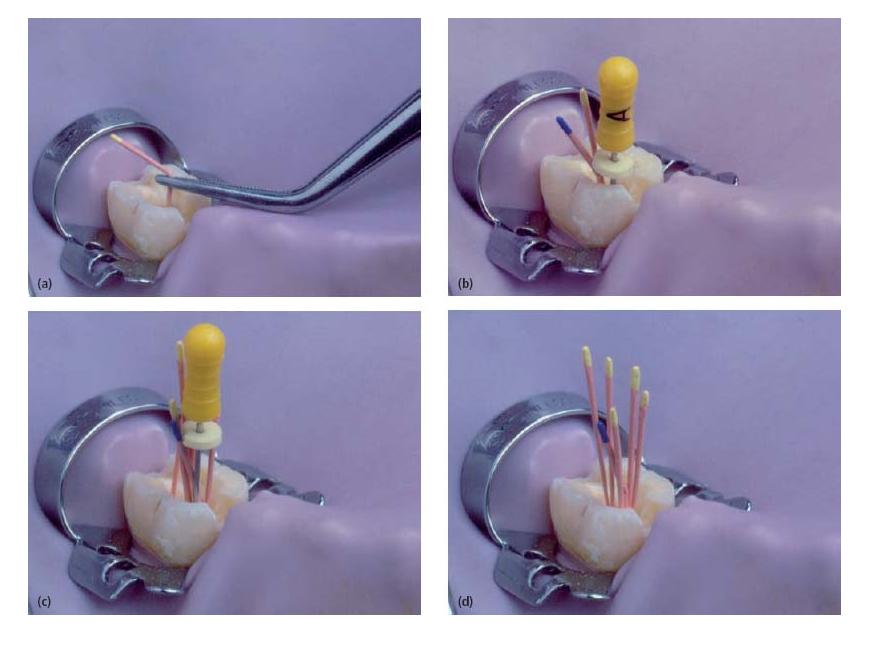 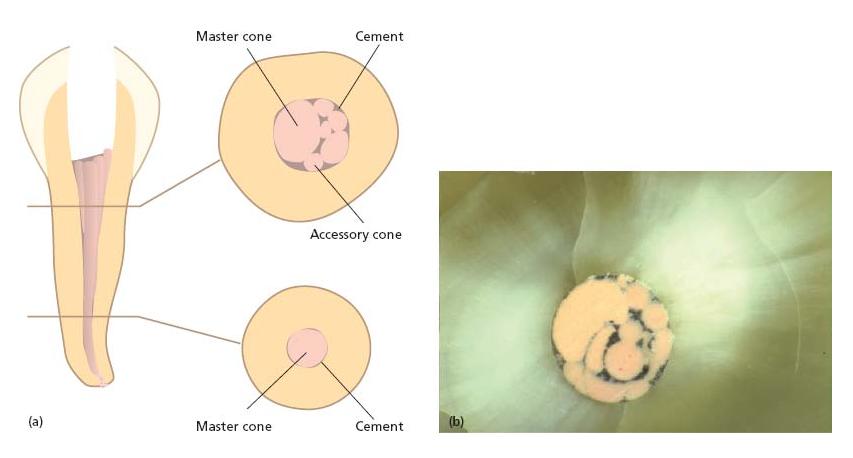 For solid core techniques, gutta-percha cones of different lengths, sizes and shapes may be obtained. In general, cones are round and have a tapered form so they gradually increase in size from the tip. So-called “standardized” cones were designed to match the size and taper of the root canal instruments used to shape the canal at its apical end. In early days these cones had a rather small taper of 2%, corresponding to the ISO standard of root canal instruments. Nowadays there are cones standardized to fit canals prepared with differently tapered instruments. Hence, there are cones with 4% and 6% tapers. “Conventional” cones are also available; these are not standardized and are classified as fine, medium and large.

Unsoftened gutta-percha does not adhere to dentin and softened gutta-percha may shrink after cooling as a result of being heated or from evaporation of the solvent used, thus leaving gaps between the material and the root canal walls (50). Naturally such defects may allow either coronal or apical leakage, or both, to cause or maintain apical periodontitis. It is, therefore, considered necessary to use a cement or sealer that forms a tight connection between the gutta-percha and the root dentin. In general, it is believed that this layer should be as thin as possible because, upon setting, sealers may shrink and dissolve in a moist environment (20).

This has led to the development of gutta-percha techniques that aim to create a filling consisting of a well-adapted mass of gutta-percha with a thin layer of root canal sealer between the gutta-percha and the root dentin. In this respect, consideration is similar to that with cast restorations, where well-fitting margins are created to leave as little cement as possible between the metal and the tooth structure.

As a general trait, but to a varying extent, root canal sealers in the initial setting phase are cytotoxic and bacteriotoxic. Although most sealers become substantially less bioactive thereafter (29, 45), as little contact as possible with the apical pulp tissue or periapical tissue is desirable. In particular overfilling of sealer material should be avoided. There are several reasons for this view:

1.   As well as being initially cytotoxic, all root canal sealers may potentially elicit allergic reactions (15). Although animal and clinical observations indicate that sensitization via the root canal occurs rarely, it is occasionally reported (13, 19, 21).
2.   Root canal cements in contact with nerve tissue, e.g. when inadvertently extruded into the mandibular canal, may cause anesthesia and long-lasting paresthesia as well as severe and long-lasting pain (7, 27, 41).
3.   Although sealer material may be dissolved and resorbed over time (25), components of sealer material may be found in the periapical tissue many years after filling, where it causes ongoing phagocytic reactions (32). Root filling material also may be found in several peripheral organs (11).

The benefits, uses and problems of each are discussed below and summarized in Core concept 13.2. For a more detailed description of these materials, the reader is referred to Chapter 12.

Once zinc oxide–eugenol materials set, they form a weak porous product that is decomposed in tissue fluids over time (25, 44, 46). Nonetheless, these materials are regarded to be clinically satisfactory (28). Practically all zinc oxide–eugenol sealers are cytotoxic and the response may be more long lasting compared to that of most other sealers owing to release of free eugenol upon gradual hydrolysis (29). Potential for sensitization exists (13, 15). Zinc oxide–eugenol cements are commercially available as Hermetic, Tubliseal, Procosol, Roth’s sealer and Kerr pulp canal sealers, and form the basis of many medicament-containing sealers.

Well-known resin-based materials are AH26, AHPlus and Diaket. Both AH26 and AHPlus consist of an expoxy resin. They are thin fluid materials that set slowly. The long setting time may sometimes be an advantage because it gives sufficient time to correct deficiencies in the root canal filling that were noticed at the postoperative radiographic check. Diaket is a mixture of vinylpolymerizates that sets rapidly within minutes, which makes it less suitable in techniques that require some working time.

These resin-based sealers elicit an initial severe inflammatory reaction that subsides in subsequent weeks and thereafter becomes well tolerated by the periapical tissues (28, 29). However, the sealer AH26 has been shown to have both a strong allergenic and a mutagenic potential (15, 26) and contact allergy to this material has been reported (16).

Sealer based on silicon, e.g. RSA Roekoseal, GuttaFlow, is a recent development. The advantage of this material is volume stability and biocompatibility. One product, RSA Roekoseal, a polydimethylsiloxane, appeared to seal straight canals well in vitro with a single gutta-percha cone even after a long-term exposure to water (51). Another product, GuttaFlow, has the same composition as RoekoSeal except for additions of gutta-percha (<30 μm) and nanosilver particles for radiographic contrast. It has been introduced to the market as the first non-heated, flowable gutta-percha that, unlike heated gutta-percha, does not shrink. A recent evaluation of its sealing capacity seemed not very favorable (30) but its toxicity appeared low (6).

Adhesive cements have been tested as root canal filling material in an attempt to improve the sealing quality of sealers. Cyanoacrylate, calcium phosphate, polycarboxylate and glass ionomer cements have all been explored. Of these, only glass ionomer cements have been widely marketed (Ketac-Endo, Endion). Although appearing favorable in biocompatibility tests and in long-term clinical follow-up studies, the materials have never gained great popularity. Likely reasons are short setting time (20) and difficulty of removal for retreatment.

Recently, new dentin-adhesive root canal cements have been introduced to enhance the bond between the core material of gutta-percha and the root canal walls. Examples are Endo-Rez and Epiphany, which are resin-based materials with hydrophilic properties. Epiphany may also be combined with a synthetic polymer-based root canal filling material (Resilon) in the Epiphany– Resilon system. Resilon mainly consists of polymers of polyesters (polycaprolacton) and bioactive glass, giving this material physical properties similar to those of guttapercha. This means that it can be used cold or plasticized by heat. While a promising development, research documentation has so far primarily been based on in vitro and animal studies observing sealing capability (1, 37–39) and biocompatibility aspects (5, 6). Independent clinical research has yet to show superiority of these materials to traditional products with gutta-percha as the core material.

Materials to which medicaments have been added

These materials may be divided into two groups:

1.   Materials ba/>
Only gold members can continue reading. Log In or Register to continue