• Closing the gap on health disparities and inequalities among diverse cultures will lead to better health for all Americans and is a responsibility of all health care providers.

• We must commit ourselves to living in a world and society in which respect for human dignity and equality is valued.

• It has been said that the mark of a great community is how well it cares for its most vulnerable citizens.

• There are noticeable disparities in dental disease by income. Poor children suffer twice as many dental caries as their more affluent peers.

• Healthy People 2020 goals are to eliminate preventable disease, disability, injury, and premature death; achieve health equity, eliminate health disparities, and improve health for all groups; create social and physical environments that promote good health for all; and promote healthy development and healthy behaviors at every stage of life.1

• A common goal for health professionals is to provide the best care to all patients.2

The United States is highly diverse, as evidenced in individual’s neighborhoods, schools, and communities. Diversity extends to integral parts of our existence as human beings such as race, culture, social and economical status, language, and national origin. Diversity also extends to lifestyles, traditions, personal and family histories, ages, abilities, and other dimensions that constitute who we are and where we come from. In most communities, many languages are spoken in schools, workplaces, and homes. All of these components of our being are fundamental in interpersonal interactions and community settings. Previously, societies primarily functioned with a monocultural and monolingual perspective. People were expected to give up the values, norms, and beliefs of the society they were emigrating from in favor of new opportunities.3 The United States has lost the image of a “melting pot” of racial and ethnic groups. Cultural diversity in American society is more realistically an intricate mosaic consisting of numerous racial and ethnic groups.4,5

The concept of diversity encompasses acceptance and respect. It means understanding that each individual is unique and recognizing our individual differences. These can be along the dimensions of race, ethnicity, gender, sexual orientation, socioeconomic status, age, physical abilities, religious beliefs, political beliefs, or other ideologies. It is the exploration of these differences in a safe, positive, and nurturing environment. It is about understanding each other and moving beyond simple tolerance to embracing and celebrating the rich dimensions of diversity contained within each individual.6

Today’s evolving society is a multiracial, multicultural, and multilingual world (Tables 10-1 and 10-2).7 The matters of race, ethnicity, and cultural differences have great significance for all who live in the United States. Society has embraced the concepts of cultural competency, cultural diversity, cultural sensitivity, cultural pluralism, and multiculturalism. These concepts are being incorporated not only into health care but also business, education, and policies. In health care, these concepts have implications on how care is provided for clients and a community that may not share the same culture and language as the provider. The clients may have different beliefs, values, attitudes, and behaviors. 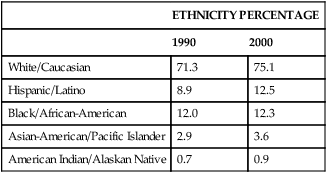 *The 2010 Census began on April 1, 2010, and more current information can be obtained in the future at www.census.gov/.

Linguistic Diversity in the United States (US) Population*

*The 2010 Census began on April 1, 2010, and more current information can be obtained in the future at www.census.gov/.

Three reasons for a health care provider to be in the constant pursuit of cultural competency are the societal realities of a changing world, the influence of culture and ethnicity on human growth and development, and the challenge of providing effective and quality health care to all people.4 These reasons indicate the need and importance of cultural competency but also the emphasis of developing skills and knowledge to communicate and collaborate with persons of other cultures.

The 2000 Oral Health in America: A Report of the Surgeon General focused on oral health issues and improvements in oral health over the past century. The report reminds us that there are serious challenges for the future and that although oral health has improved in the United States over the past century, disparities in oral health still exist. Special population groups, such as infants and young children, the poor, those living in rural areas, the homeless, persons with disabilities, racial and ethnic minorities, the institutionalized, and the frail elderly, experience a greater burden of oral and craniofacial diseases. Great disparities also exist in access to oral health care and use of oral health promotion and disease prevention services, each vital to the establishment and maintenance of optimal health.8

It is understood in the health, medical, and dental communities that there is a critical need to eliminate disparities in health care among the diverse populations in the United States. A health disparity is a population-specific difference in the presence of disease, health outcomes, or access to health care.9 Disparities in heath status are compounded by reduced access to health care services. Although many factors affect health status, the lack of health insurance or underinsurance, and other barriers, such as transportation, rural settings, and hours of operations of facilities, are key components of reduced health care access. Underserved populations’ use of medical and dental preventive services is diminished by an inability to obtain providers and services. Increased use of health services can reduce disease and contribute to improved health status (Figure 10-1).10

Health care access problems include several components. Two important components are (1) the influences of race or ethnicity on an individual’s perception of a given illness and (2) the decision to seek health care. A primary requirement in providing culturally sensitive medical care is a basic knowledge of the health status and needs of those groups being served. Health care providers traditionally have their own expectations of how health care should be delivered and how patients are supposed to respond to care. However, if they are to effectively work with a multicultural population, health care providers must alter their traditional ways of treating patients. Historically, many of the health care providers serving ethnic populations have been members of these same ethnic/racial groups themselves. It is imperative that all professionals who provide health care have the knowledge and communication skills that will make them attentive to the cultural differences of their patients.11

Culture is an integrated pattern of human behavior that includes thoughts, communications, languages, practices, beliefs, values, customs, courtesies, rituals, manners of interacting, roles, relationships, and expected behaviors of a racial, ethnic, religious, or social group, as well as the ability to transmit these to succeeding generations.12 Culture can also be defined as a specific set of social, educational, religious, and professional behaviors, practices, and values that individuals learn and adhere to while participating in or out of groups with whom they usually interact daily.13a In common terms, culture is what we live every day, our daily interactions at work, school, or in our community. It is the lens that we use to view the world and to form our opinions, thoughts, aspirations, and goals in life. Culture is both inherent and learned; it is a shared way of interpreting the world. Culture is simple yet complex, common yet unique, and constantly evolving based on our life experiences. Several factors influencing culture are listed in Box 10-1.

• Length of residency in the United States

Given the wide diversity present in modern societies, cultural competence is a necessary skill, allowing us to provide appropriate services to all individuals and communities. Given our modern technologies, it is also a skill we need for global survival. Historically, the challenges of insufficient cultural competence for cross-cultural collaboration go back to the earliest beginnings of humanity. Every human culture teaches its members to value their beliefs, morals, and views of reality as the best, as the ideal; in some cases, cultures teach that their beliefs are the ONLY acceptable way to be or think. The resulting lack of cultural interchange and adaptation could be called ethnocentrism—judging other cultures by your own standards consistent with your values, not theirs.13b

Reasons to incorporate culture in your daily activities include the following:

• To understand the values, attitudes, and behaviors of others

• To avoid stereotypes and biases that can undermine efforts

• To focus on commonalities not differences (Figure 10-2)

Cultural competency in health care describes the ability to provide care to patients with diverse values, beliefs, and behaviors.14 Included in cultural competency is the adaptation of oral health promotion and disease prevention and clinical dental hygiene services to meet the patient’s social, cultural, and linguistic needs. Individuals who must be treated in a culturally competent manner include children, the elderly, and people with disabilities. Cultural competency is a developmental process that evolves over an extended period of time. Effective cultural competency needs to be implemented on an individual, organizational, and community level. All three entities can be at various stages of awareness, knowledge, skills, and attitudes along the cultural competence continuum (Figure 10-3).15

Models exist that enable us to acquire the skills for self-assessment, to determine implementation of cultural competency in organizations and systems, and to evaluate effectiveness of appropriate community outreach. Following are examples of models that can be implemented in various settings and cross-cultural encounters to ensure that culturally competent attitudes, knowledge, and behaviors are implemented when providing oral health care in either a clinical or community setting. Box 10-2 outlines the Oral Health Care Culturally Competent (OHCCC) Guidelines.9

• Develop the capacity for cultural self-assessment.

• Value diversity among peers and clients.

• Understand the dynamics of the interactions between and within cultures.

• Institutionalize and implement cultural knowledge in a nonjudgmental manner.

• Be creative in finding ways to communicate with population groups that have limited English-speaking proficiency.

The Cultural Competency Education Model is a conceptual model that focuses on the process of developing cultural competency in health care practices. This model is designed to foster understanding, acceptance, knowledge, and constructive relations between persons of various cultures. The model is designed as a tool for developing the knowledge and skills that health care providers need to provide quality care.4 The model is framed on three areas of intervention: self-exploration or awareness, knowledge, and skills (Figure 10-4).